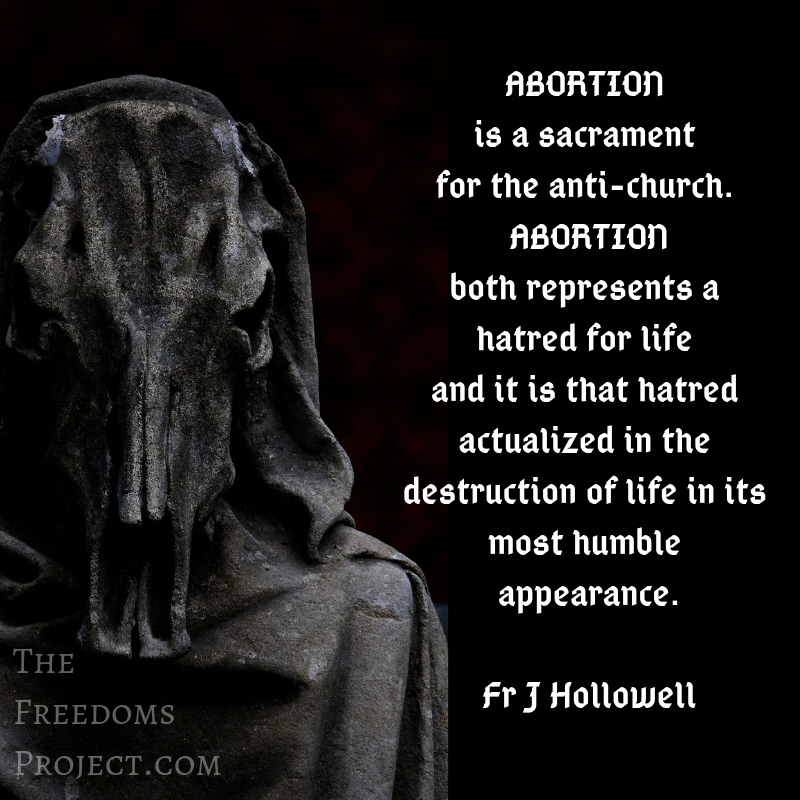 I knew that people chose hell - as opposed to God sending them there - but couldn't understand how anyone would choose that, and so presumed that no-one actually did. Since then, many things have happened to change my mind on the size of hell's population; I really only want to talk here about one thing that led me to this change of perspective: abortion. In the course of my pro-life work, many people have crossed my path - lawyers, journalists, politicians, pro-abortion activists, magistrates, police and public servants of all stripes. And I've learned a lot through reading articles and papers and watching videos online. The one thing that has struck me most, during the last 6 months particularly, is that there appears to be a sizeable portion of the human race who are quite prepared to make hell their home in the next life. I've come to realise that, just as Christians work energetically to share the Gospel and to show God's love through good works, there are disciples of the evil one doing their utmost to build a kingdom for satan on the earth. These are not the 'useful idiots' of whom we often speak; these are diabolical heralds working to usher in Lucifer's dreadful reign. And one of the most effective ways to build foundations for that evil kingdom - to pitch satan's tent, so to speak - is to promote abortion.

The Sacrament of Abortion

The term, 'Sacrament of Abortion' apparently comes from a 1998 book of that name written by Ginette Paris. It's blurb on Amazon reads:

Issues of life and death, love and responsibility are at the core of every religion. That is why the English translation of this book was originally published with the title "The Sacrament of Abortion," as it shows that the decision to abort may also spring from a religious feeling that it is the "right" thing to do, both physically and spiritually. As Ginette Paris writes, "Abortion is about love, life, and death." Since its original publication, the book has ben widely used in abortion clinics in Canada and in France and has even been given by some doctors to each and every women who had the procedure, along with pain killers.

So, it's no exaggeration when pro-life people call abortion, "Satan's Sacrament"; abortion advocates, especially those who openly profess to be witches, frequently use this term. For these advocates, and for the abortionists themselves, killing babies just isn't enough. They feel the need to gloat, to boast, to 'shout their abortions' and to harass and intimidate anyone who dares to disagree with them. Commentators on both sides of the abortion-rights spectrum have also referred to this deliberate termination of a pre-born child as a 'sacrament.' Gloria Steinem, Ben Shapiro , abortionist Patricia Baird-Windle, and others have used this term, in some cases quite literally, to elevate abortion from the merely practical, albeit immoral, solution to an unwanted pregnancy to a spiritual imperative. Catholic Priest, Fr John Hollowell, wrote

Abortion is a sacrament for the anti-church. Abortion both represents a hatred for life and it is that hatred actualized in the destruction of life in its most humble appearance.

Even politicians have acknowledged this diabolical and supernatural element of abortion. US Congresswoman, Nancy Pelosi, a long-time supporter of abortion and abortion 'rights', Pelosi voted down a 2013 bill to ban late-term abortions, stating: “As a practicing and respectful Catholic, this is sacred ground to me…. This shouldn’t have anything to do with politics.” Pelosi is infamous in Catholic circles because she is allowed by Church authorities to receive holy Communion at Mass, which is clearly in violation of the Scriptural mandate to anathematize hardened sinners. And this sin of abortion, one of the gravest sins humans can commit, cries to heaven for justice.

The religious nature of abortion enshrined in law

In her paper, Abortion as a Sacrament: Mimetic Desire and Sacrifice in Sexual Politics, Bernadette Waterman Ward exposes how the law explicitly ties abortion 's physical nature to its religious one.

No voice is to be upraised to call the unborn child's death a murder; exclusion zones for protesters keep dissenting voices and images out of an aborting woman's sight and hearing. Until February, 1997 eight-foot "bubbles" of protection surrounded abortion clinics' patients and employees [in Illinois, USA] ; their very persons were sacred ... This is surgery after the pattern of ancient sacrifice...

Ward continues, relating details of America's FACE - Freedom of Access to Clinic Entrances - law, which prohibits pro-lifers both from approaching women who are accessing abortions and from engaging in religious activity at the entrance to abortion mills.

A startling clause follows, penalizing whoever intentionally damages or destroys the property of a facility, or attempts to do so, because such facility provides reproductive health services, or intentionally damages or destroys the property of a place of worship... The phraseology equating abortion clinics with places of worship is consistent throughout the law. It is not an accident. Attempting desperately to save the appearance of equal protection for opponents and proponents of abortion, the attempt to equate the sacred spaces of Christianity and the cult of abortion eerily resembles the fiction of unanimity gained by forced participation in Dionysiac processions.

Shouting abortion for a living

One would think that there would be an element of shame attached to being an abortionist. After all, we often read how difficult it is for abortion mills to maintain staff; many close due to the inability to secure doctors willing to violate their Hippocratic oaths.  But these days, some are so enamoured of their occupation that they take to social media and attempt to massage the consciences of their 'pro-choice' followers. One of those vocal advocates is Leah Torres. She is an abortionist who just loves her job. She made headlines earlier this year when she tweeted that babies can't scream because she transects their (umbilical) cords first. At the time, I wrote about how inappropriate it was for Torres to be invited to speak at an Australian pro-life conference. (You can read that here.) Her latest comments suggest that pre-birth babies have no rights unless permission for their existence is secured from their biological mothers. The ludicrousness of that comment is beyond belief, but it seems there is no limit to the level of absurdity to which rabid abortion advocates will reach.

Not every champion of abortion is destined for hell. We know that because some repent and have even become tireless advocates for life. I'm thinking here of ex-abortionists like Bernard Nathanson, Anthony Levatino and Carol Everett. Somehow, in the depths of their shame they and others like them experienced a spark of Grace which led them to convert and to reject their sickening profession. But those who do not repent are without a doubt destined for hell. And the most fiendish ones - those who actually love to talk about and promote abortion - are clearly in the domain of being willing workers in satan's bloody vineyard. In a sickening parody of Christ's bounteous harvest - achieved when grateful men and women who are destined for heaven become filled with the gifts and fruit of His Holy Spirit - satan's vineyard resembles a field devastated by famine, hail and locusts with its unwholesome fruit crushed in a tainted winepress. Sacrificial blood flows - not to cleanse, as does the precious Blood of Our Lord, but to stain the earth with guilt. His innocent Blood was willingly shed to save us from our sins: in satan's vineyard, innocent blood is unwillingly shed to bind women and men to the evil one - potentially for eternity. Nowhere is this diabolical reality revealed more clearly than where abortion is spiritualised and promoted as good, holy and 'sacramental.'