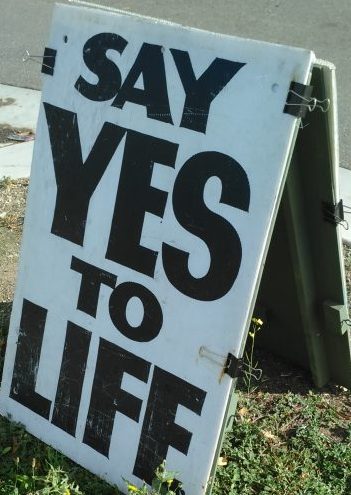 Having also supported women post abortive and listened to the heart rending stories of torment, regret and often self destructive behaviour it was difficult, to say the least, to be there at the coal face and witness such impending destruction. It's not only the loss of the child but the damage to the parents of each child which is so impacting on those who endeavour to help and those who are personally involved. People often ask me "How many babies do you think you've saved?" If just one baby was saved by our presence that's world changing.

However we estimate close to twenty tiny lives were saved during those years from 1998 until 1st. May this year when the government of Victoria, in it's "wisdom", imposed a 150 metre exclusion zone for anyone attempting to help (harass in their words) these girls and women. It is worth noting that the push for these exclusion zones came from the abortion industry. In actual fact we, those who offer help, are bad for business. I remember one young couple we were able to help had been asked to bring their Medicare Card and $1700 in cash to abort their child at 18 weeks into the pregnancy. That little boy is now nearly five years old and, after living with his grandparents overseas from age two to age four while his mother finished her studies, is now back living with her here in Australia.

Another case which comes to mind is the day, probably over 10 years ago now, when a mother took the time to listen to us before entering the facility. She had a change of heart inside and exited with her baby still alive. After thanking us for our support, just before proceeding on her way, she added "Oh by the way, I'm having twins". Tormented by the father of her unborn child, who many times had promised to leave his wife, another visibly upset pregnant mother broke down and accepted our offers of help. Her precious daughter starts school next year, her older sisters are delighted with their younger sibling and the mother has been helped towards the healing of two abortions she had undergone previously. She is now a great public advocate for life, has returned to the Church and proclaims her faith in Our Lord.

These are just a few examples of those we have helped over the years. Many who chose life for their babies did not need any ongoing help; Just a few words of encouragement at a crucial time. They expressed their gratitude for our presence and left us with new found hope. There were also those who didn't even speak to us but left the facility after just a short time inside and gave us a smile and a thumbs up as they drove away. How many babies will be destroyed now, with these law changes, that might have been saved. How many mothers will have to work through the aftermath of abortion when they come to the realisation that their children have been destroyed.

How many fathers will suffer the pain of not standing up to defend their children or the pain of losing a child they had been willing to fight for but it was taken out of their hands.

How many of these, had we been able to continue our life saving work, may have accepted our offers of help. We will never know.