What Solzhenitsyn Taught Me about Pro-life Work 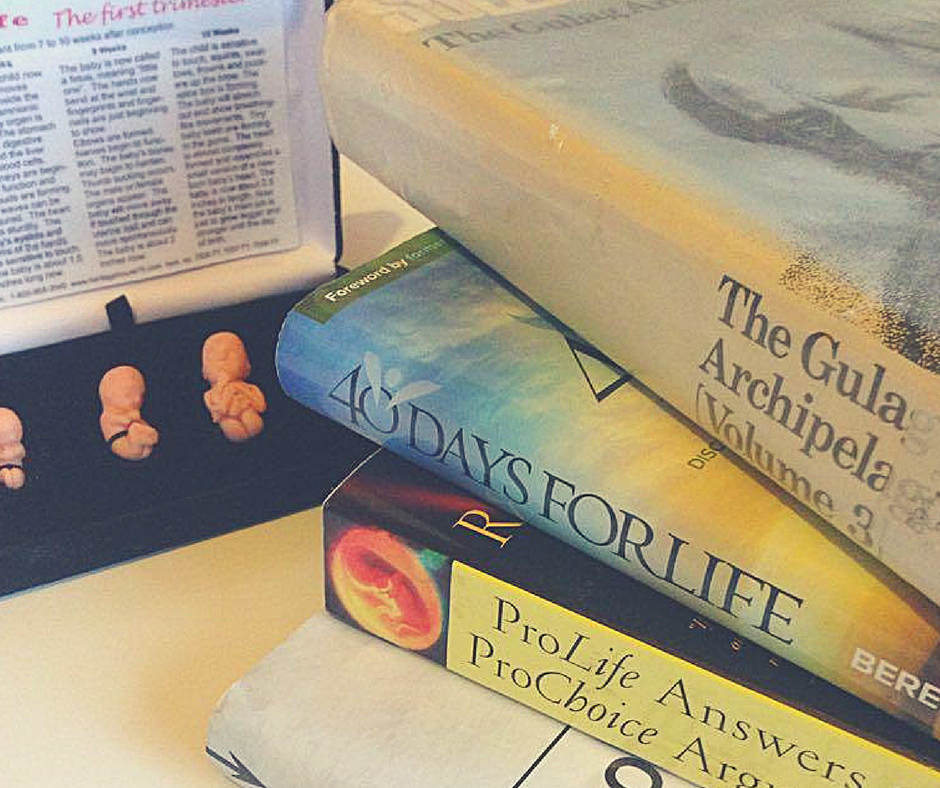 Only a short time after the world's outcry at Hitler's injustices in Europe, Stalin reintroduced forced-labor camps into Russia. Tens of millions of 'political prisoners', including women and children, were hauled from camp to camp; tortured, abused, murdered. These camps came to known as gulag. [The term “GULAG” is an acronym for the Soviet bureaucratic institution, Glavnoe Upravlenie ispravitel’no-trudovykh LAGerei (Main Administration of Corrective Labor Camps), that operated the Soviet system of forced labor camps - source]

Alexander Solszhenitsyn was imprisoned for over a decade in these camps as a political prisoner, under article 58. In the '70's he was expelled from Russia for twenty years, during which time he lived mainly in the US. Solzhenitsyn wrote many books about his experiences, including his 3-part series, The Gulag Archipelago. In using this title, Solzhenitsyn likens the series of labor camps, or gulag to islands scattered across Russia.

Some years ago, around the time I began to be involved in pro-life work, I was looking through a bookcase at home, where some great western classics were stored. For some reason, felt inspired to pick up this book again. I remember wondering to myself how this book would help my to focus on my new calling, but opened it at Chapter 1 to read the word, 'abortion.' The context was nothing to do with terminating a pregnancy, (it was a reference to the death-camps) but there was that word, abortion, staring me in the face. I continued to read, and found the statements that have helped guide my pro-life philosophy:

Public opinion! I don't know how sociologists define it, but it seems obvious to me that it can only consist of interacting individual opinions, freely expressed and independent of government or party opinion.   So long as there is no independent public opinion in our country, there is no guarantee that the extermination of millions and millions for no good reason will not happen again, that it will not begin any night - perhaps this very night.

Solzhenitsyn wrote that it was public opinion that had played the greatest role in allowing Stalin's evil regime to flourish. He said that the chief means prisoners had of drawing attention to their injustices, namely protest and hunger strikes, had been useless when there was no public awareness of them. The Russian media and leaders made sure that the people didn't learn the truth about gulag, and it suited the populace to remain ignorant. The parallel between abortion and Stalin's gulag is obvious. In the same way that the labor-camps existed due to ignorance and indifference, abortion is allowed to flourish due to the ignorance and indifference of the public - especially of the churches. Contemporary pro-life marches and rallies can be likened to Solzhenitsen's prison mutinies which involved thousands of prisoners. The mutinies did nothing to help the prisoners' cause due to lack of interest by the media, and by extension, the public. Today even when extremely large crowds gather to protest abortion, such as we see in Washington, Paris and Brazil, public opinion is not changed, due to a consistent media blackout. This isn't to suggest that marches have no good fruits or that the pro life cause would be better off without them. The point is that marches are not an effective way of changing the culture. They are good for morale and can be a point of entry to pro-life work, but only minimally affect the public. It's when the pro-life message is taken to the general public through consistent sidewalk advocacy and prayer vigils that the man on the street must begin to form his own opinion. Social media campaigns, blogs, pop-up protests, life displays: all of these forms of outreach are also very helpful if we are to change public opinion.

Monsignor Reilly, founder of the Helpers of God's Precious Infants, has witnessed outside abortion facilities for decades. He writes about why pro-lifers witness outside these evil places: to influence the culture and also to support mothers and to comfort the dying.

We pray to obtain God’s mercy for the abortionist and his staff who do the killing. Our peaceful, prayerful presence hopefully will disturb the consciences of the workers at the abortion mill and say to them that, though we love them, we will never accept what they do.   We witness to those who pass by, praying that they will take notice of what is going on and be provoked to take action against the killing in their neighborhood.   We plead with our prayers for the lives of the babies in the wombs of the pregnant women who are scheduled for abortions that day. We reach out to these women with the love of Christ .... God is calling the mother to heroic virtue as in many cases her situation is so difficult.   While sidewalk counselors provide literature which gives all the financial and medical help available, we are there with loving prayers for the unborn children who are doomed to die. The only human love they may ever encounter in their short lives may be from those of us standing outside. We embrace them spiritually. We stand with them when they die.

Fr. Frank Pavone, of Priests for Life, is also an outspoken advocate for pro-life public witness. In his article (and hardcopy pamphlet), Our Media is the Streets, he writes:

"The street enables us to take our message directly to the public, bypassing the government, the media, educational facilities, and all those in the institutions who seek to silence the pro-life message. People driving or walking are not there because they want to hear us, but because they are going about their daily duties. The entire cross-section of the public is reached. We meet people where they are, and make it impossible for them to ignore us...."   ".... By going into the streets, we always win. Whether people agree with us or not, whether they are persuaded by our presence or not, we have forced them to confront the reality of abortion. We have brought abortion to their attention whether they like it or not. That means we win. If people never confront abortion, it will never be stopped. If people are not forced to re-think it, then they will remain in ignorance ("I don't know") and denial ("I don't want to know"), and abortion will continue unchallenged."

These pro-life leaders, and many others like them, believe that public witness is an essential part of pro-life work. They, like Alexander Solshenitsyn, realise that public opinion can be changed when we circumvent the media and institutions. They know the 'man on the street' needs to be confronted by the reality of abortion.

Solzhenitsyn's writings also led me to understand the sheer scale of abortion deaths. He compared the atrocities of Stalin to those of the Russian Revolution, when Tolstoi was said to have broken down and wept at the news of an execution of five or twenty prisoners. Tolstoi said he 'couldn't go on living, that it was impossible to imagine anything more horrible.' Solzhenitsyn wrote this reply:

It is, however, very easy to imagine things more horrible.   It is more horrible when executions take place not from time to time, and in one city of which everybody knows, but everywhere and every day; and not twenty but two hundred at a time, with the newspapers saying nothing about it in print big or small, but saying instead that "life has become better, life has become more cheerful."

This sounds chillingly like our twenty-first century society, where 'life has become better, more cheerful' because men and women need no longer bear the consequences of their sexual activity.

The executions of our children occur daily by the thousands, and tens of thousands.

Purpose-built baby-killing facilities stand side-by-side with suburban homes and schools, hidden behind the comforting facade of women's 'health' clinics. They ride on the back of the medical industry's reputation for offering help and healing. And far from reporting such an atrocity, the newspapers report instead that women have a 'right' to this 'ordinary medical procedure.'

Solzhenitsyn also had some interesting things to say about the human cost of seeking a worldly Utopia, which parallel contemporary culture's lust for personal autonomy. The revolutionaries of Stalinist Russia wanted to create a worker's paradise at the expense of personal and economic freedom.  Solzhenitsyn's words about Marxist bloodlust, which he refers to as human sacrifice, are similar to the language of some pro-life activists today:

They, the zealots, could not afford to wait, and so they sanctioned human sacrifice (of others, not themselves) to bring universal happiness nearer!

Like the false narrative of the Marxists, who claimed that 'life had become more cheerful', today's abortion-loving progressives use the media to brainwash us into thinking that life is good and that we deserve even more than we have. But although this new form of human sacrifice has reportedly become 'safe, legal and rare', suicide, despair, addictions, mental illness are rampant in modern society. The universal happiness promised by the sexual revolution is no nearer than it was in Solzhenitsyn's time. And even if Russia had somehow managed to become a better place - an impossibility when there is an absence of virtue and sacrifice - Solzhenitsyn's words remind us that the deaths which occur during a revolution are never to be dismissed as mere collateral damage. Similarly, abortion's death toll could never be justified as being necessary for the greater good. The image above is from a social media campaign by Marie Stopes, Tanzania.

Abortion has been legal in the US for forty years, about the same amount of time as Russia's forced-labor camps operated. And abortion has been available in Australia for almost as long. With so many attacks on marriage, family and on life itself, our obligation to speak up is more urgent than ever. If we want to see the end of the archipelago of abortion facilities around our cities, we need to change public opinion in whatever ways are open to us. Through alternative media, cultural endeavours and especially through public witness, we could gradually change the culture from pro-death to pro-life. That is the bottom-up approach in which each of us can can play our part. But there's also a top-down approach in which Christians especially need more involvement. This means using politics and the legal system to formalise cultural change. Politicians will continue to back pro-death legislation as long as they believe that the majority of their constituents are pro-abortion. And those voters who aren't necessarily fond of abortion, but stay silent on the issue, might as well be abortion advocates: they don't influence politicians to defend life. The legal system is there for all citizens, and we need to be preemptive about using it. The abortion industry hates to be exposed to scrutiny, and we can be wise as serpents in making use of our legal protections to combat the evil archipelago. I'll leave the last word to Solzhenitsyn:

Should we put an end to the Archipelago or not? Or is it there forever? For forty years it has been an ulcer in our flesh - isn't that enough?