Thought Police thwarted in the ACT 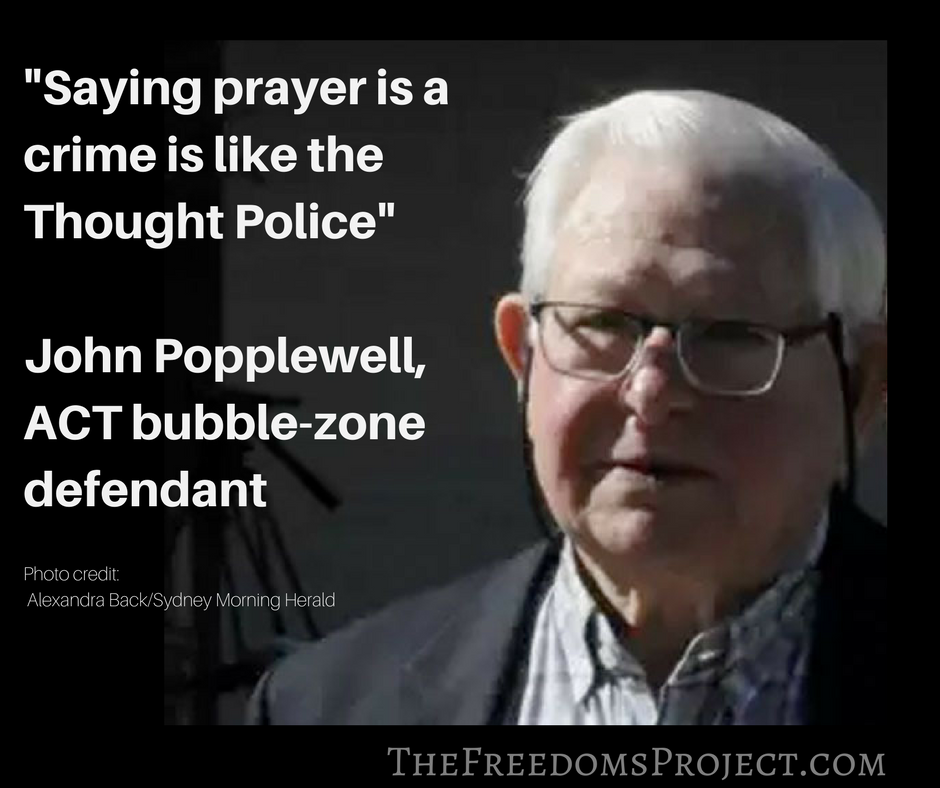 "There is the presence of the normal and the absence of the abnormal. They simply do not stand out as participating in any extraordinary activity. They do not even gather. I make these observations cognisant of their previous involvement in prayer vigils and their admitted views about abortion.

"I accept they were each engaged in silent prayer, and that such prayer involved no component of expression, communication or message to those around them."

While pro-lifers have engaged in silent prayer inside the bubble-zones of other jurisdictions, the only charges to have been laid for this  have been in the ACT. Arrests in Victoria and Tasmania were for different activities;  approaching a couple and holding a sign quoting the UN Declaration on the Child, respectively.

I was able to speak on the phone with one of the men involved in this case, John Popplewell. John said that:

There was nothing we were doing that would single us out from anyone in the street. This is a good outcome for us personally, but not a good outcome in terms of the capacity to engage in public prayer."

John is very concerned about the prosecution's attempts to use what is known as 'tendency evidence', in order to prove that he and his companions were protesting about abortion within the zone. As John has been a regular writer to the Canberra Times over the years, he is well-known for his pro-life values and his stance on abortion. In the view of the prosecution, this meant he demonstrated a certain tendency to be anti-abortion, and used this tendency as evidence that the men's private prayer was, in fact, a protest against abortion. John calls this inference an example of Thought Police in action: trying to criminalise behaviour based on suspected thoughts. As we conversed about the tidal wave of immorality that is sweeping over our nation, including another assisted-suicide bill being put forward in the ACT, John remarked:

The new laws were created under the Health Act and apply to a single building in Civic, the Canberra CBD. The building in question houses the ACT community health services and related businesses, including abortion provider, Marie Stopes. the laws cover two types of 'prohibited behaviour': protest and the taking of video of women accessing the abortion facility.  Taken from the ACT Government Health Department website:

The protected area will assist to prevent behaviours that act to increase emotional distress and prevent women from accessing family planning and sexual health services, including abortion.  In the ACT, abortion is a legal and medically recognised health procedure. The protected area will also ensure that staff and patients entering or leaving the building can do so without interference, prejudice or intimidation from protesters.

It is an offence to engage in prohibited behaviour including protesting, displaying signage, making verbal comments or capturing of visual data that is intended to prevent or hinder people entering or leaving premises at 1 Moore Street. If people are found protesting around or within the building of 1 Moore Street, security staff will inform them of the prohibition associated within the protected area, and they will be asked to leave. If they continue to protest, ACT Police will be contacted and penalties may apply.

As with bubble-zone laws in other Australian jurisdictions, the penalties are steep: up to a $7500 fine and 6 months jail for making a video of women accessing abortion services.

Judging the Atrocity of Abortion - not Judging Women

As would be expected, abortion providers aren't happy with the result of the ACT case. Acting chief executive of Marie Stopes Australia, Jacquie O'Brien, said: "Patients can often feel judged and scrutinised as a result of their presence. The fact is that in 2018, women really should be able to access this common medical procedure without having to be judged by three men with rosary beads."

If only she realised that aborting women aren't being judged by prolifers, but that it is the act of abortion that is being judged as an abhorrent, violent human rights violation. As one writer to the Canberra Times put it:

I am hoping that the exclusion zone is clearly designated for any "old guys" who just happen to be praying for peace and for the end of violence against women in all forms.