Save the 8th! Interview with Richard Casey 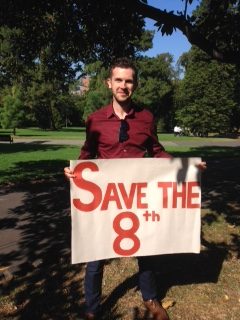 One such woman was Aisha Chithira, who travelled from Ireland to East London's Ealing abortion facility. [This is the facility that recently became the site of new exclusion-zone legislation - designed to keep life advocates from offering help to vulnerable women.] Aisha Chithira sadly died after her abortion was grossly mismanaged by the staff at Marie Stopes. Progressive financier, George Soros, infamous for pouring money into Ireland's successful bid to change the definition of marriage, has heavily funded Ireland's YES-Repeal campaign, often illegally. Some organisations, such as Amnesty International, have been forced to return money donated by Soros. His friends, megastars U2 have recently come out in support of repeal - an indication that the moniker 'Christian' can provide an easily-dented veneer of respectability for immoral celebrities. A young Save the 8th! supporter is living temporarily in Melbourne, and I caught up with him to ask a few questions about Ireland's referendum.

My name is Richard Casey. I am from Causeway, a small rural village in North Kerry. I am a primary school teacher. I recently moved to Melbourne and planned on staying for just under 6 months to get an experience teaching and living in a different country. I will be flying home a month early so that I can vote no in the referendum.
I am a Catholic and have always had faith. Sometimes it has been tested and I have wavered on my journey. Having taken these few months out to think about the direction of my life I have decided to go back and study Catholic Education next year in Maynooth College. I hope to learn more about my faith and to become a better educator.
A sister of mine was involved in pro life groups as I was growing up. I also distinctly remember seeing a video of what an abortion entails in my secondary school. After leaving college I heard about some pro life events and rallys. Initially I was afraid of what people would think of me if they heard I was attending pro life events. However, I attended a number of these in the last few years. Each event I have been to has had such powerful testimonies that I have been inspired to act to help protect the unborn child. Stories of women hurt by abortion, testimonies of former abortionists and women who have spoken about their children born with disabilities and life limiting conditions have all had a profound impact on me.
3 years ago I began volunteering with the pro life campaign doing leaflet drops in my locality. With rumors of the referendum looming I also began canvassing for a number of weeks before leaving for Melbourne. I was frustrated that I could not volunteer and canvass while I was in Melbourne but I have been able to remain active on social media and I have let many of my friends know that I will be flying home to vote no in the referendum. I have also been very fortunate that Melbourne Pro Life groups like Youth for Life and Helper's of God's Precious Infants have agreed to take part in photos of solidarity for the pro life cause in Ireland. These photos have been shared on social media by a number of pro life advocates. I will also be doing interviews with Irish National papers as to why I am flying home to vote no in the referendum.
I will continue to work and hope and pray for a no vote in the referendum and for the protection of the unborn child.

A few questions about Ireland's battle to save the 8th:

1. In many ways, Ireland is a symbol of the culture of Life holding out against  the culture of death. What do you think a 'Yes, Repeal' win would mean for the Irish pro-life community?

There is little doubt that a yes vote in the referendum would be hugely disappointing to the pro life community in Ireland. There has been a massive effort from pro lifers all over the country to protect the 8th Amendment and thus to protect women and unborn children from abortion. Ireland remains a symbol of life at the moment and if the no vote was to win the referendum then it would be a major boost to pro lifers across the world. Regardless, the pro life community will always seek to protect the unborn child from abortion.

2. What kind and how much pregnancy support is available in Ireland for vulnerable women?

Gianna Care is one of supports that I am aware of that provides support for vulnerable women during pregnancy. They do fantastic work and support women with free pregnancy ultrasound, free doctor, free maternity/baby equipment, free post abortion help as well as many other supports. Rachel's Vineyard also provides support for women seeking healing after an abortion. Both these organisations give great accounts of what they do and how they support women on their websites.

3. Will exclusion zones be part of decriminalisation legislation?

4. What has been your experience in canvassing for the NO vote? Are people generally for or against repealing the 8th?

My experience canvassing was that there was a minority of people who were either very much for or against abortion. A lot of people engaged in conversation and took the information on the leaflet that we were handing out. Whether or not they actually read the leaflet is something that I cannot know. Overall I felt I received a more positive than negative reaction to my canvassing. Different people I have spoken to involved in canvassing have said that they have received a lot of positive feedback from the public although certain areas have been known to be more pro-abortion than others. The 'middle grounders' are the vital ones to reach out to before the referendum.

5. How well does the public understand the extent of proposed legislation?

I do not believe that the public has been very well informed about what will actually happen if there is a yes vote in the referendum. I have heard a number of people being very surprised when they find out that abortion on demand would be introduced up to 12 weeks and up to 6 months for 'health reasons' and up to 9 months for life limiting conditions. Some people are still learning about the developmental stages of the unborn child also. They are unaware of just how developed an unborn child is at 12 weeks. When they do learn then a lot of people recognise the fact that this is a human life worthy of protection. Overall, a lot more information needs to be disseminated if people are to really know what they are voting for.

6. How large a part has social media played in the Save the 8th campaign?

I believe social media has had a major role to play in the Save the 8th campaign. There are so many pro life groups in Ireland working tirelessly at posting information and videos about the importance of saving the 8th. People (myself included) have changed their profile pics on social media to support the no vote. Conversations are being started and true information is being spread. The reality of what an abortion is and how it has impacted on people's lives has been shared thousands and thousands of times and has been viewed by many, many more. The positive role of social media in this campaign cannot be understated.

7. How have the major political parties approached the referendum? The churches?

Fine Gael and Fianna Fáil have both got pro life advocates in their ranks. Fianna Fáil much more with more than half their parliamentary party backing a no vote.  Peadar Tóibín and Carol Nolan are the only two of Sinn Féin's 23 TDs who have publicly said they will vote no. In my own constituency in Kerry three of the five TDs have committed to voting no. Fine Gael Taoiseach and Tánaiste have both previously seemed to be opposed to abortion but have changed stances in recent times and are pushing for the repeal of the 8th Amendment. This is most disappointing. It is also very disappointing that the Minister for Health Simon Harris is shamelessly pushing for repeal of the 8th Amendment.
Priests have been urged to speak about the referendum at masses before the referendum. “The Catholic Church, in common with other people of goodwill, teaches that ending the life of an unborn child, like the taking of any other innocent human life, is always evil and can never be justified,” Archbishop Martin said in January of this year. Bishop John Buckely, amongst others in the church, has similarly spoken of the absolute importance of this vote, saying "We will never again have a more important vote".