Babies, Militants and the Media 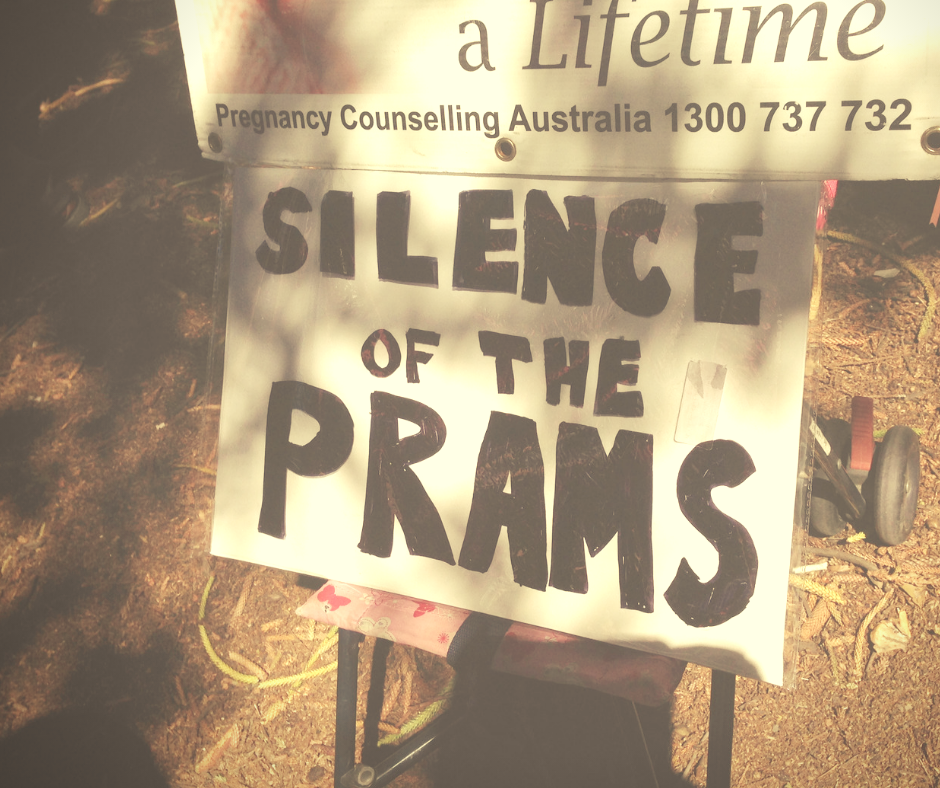 As Cherish Life puts it:

URGENT: QUEENSLAND GOVERNMENT’S EXTREME ABORTION BILL: THE DETAILS On 16 July 2018, the Queensland Cabinet unsurprisingly decided to accept the recommendations of the hand-picked Queensland Law Reform Commission and adopt its Draft Termination of Pregnancy Bill 2018. A parliamentary vote is scheduled for the parliamentary sitting week of 16 October. www.cherishlife.org.au/

They have seen just how bad the Victorian legislation has been, and they do not want to repeat it up in Queensland. Human life is far too precious to allow dangerous bills like this to sneak through when most folks do not realise just how bad they really are. 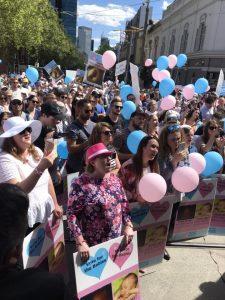 Back here in Melbourne we talked to some folks who passed by and they wanted to know what this was all about. When we informed them that for the past decade Victoria allows open slather on baby killing right up to the day of birth, folks were quite stunned. They did not realise things were so extreme here. And that is the trouble: most folks do not have a clue as to what is happening in this area. And that is why we hold these marches every year, to alert people, to inform people, and to wake people up. Most folks are totally oblivious as to what various abortion laws allow for in the West. Many are quite shocked when they actually learn what is going on. However, regrettably, some people’s hearts are as hard as a rock when it comes to the truth of abortion. As an example, a few of us were chatting with an elderly couple who stumbled upon our rally. When they were told of its purpose, they made it clear how disgusted they were with us, not the baby killing. We kept asking if they were happy with killing a baby right up to birth, and they kept getting more and more angry. The woman kept shouting her mantra: “It’s not a baby”. To which the only obvious reply is: “Then just what is it? Is it a carrot? A dingo? A piece of fruitcake?” When we pressed them on this, the man at least finally admitted that if we killed a baby one minute after birth, we would be charged with a crime. So we asked him what two minutes’ difference meant. Why is it just fine to murder a baby a minute before birth, but illegal and immoral to do it one minute after? What has changed? A few inches in terms of location? Yet the pair walked away angry and defiant. Reason did not work with them, as they seemed to have their minds made up on the issue. ‘It’s not a baby so we can do what we want with it’ was their position. Hmm, where have we heard that before? For quite a long time blacks were considered to be non-persons as well, so we could do with them whatever we wanted. Thankfully we are more civilised now, and slavery is no longer praised and pushed in the West. But when it comes to the unborn we still have the same barbaric attitudes. We still think it is just terrific to kill our own offspring for any reason, at any time. Two other things stand out about today’s march. And if you have read my previous reports about these marches, you will see that some things remain the same. While several thousand peaceful baby lovers were there, we also had the usual small but noisy pack of protestors. Perhaps two dozen very angry and very vocal young people were there, screaming at the top of their lungs, trying to disrupt the meeting and prevent speakers from being heard. Thankfully the police were there in force, and had most of the militants kept away from our rally. But some managed to break through and target the audience, letting out blood-curdling screams. repeating mindless chants, and shouting through megaphones and the like. Thankfully they were quickly and calmly led away by police and security forces. They tried to do this a number of times, but given that there were only a handful of them to begin with, eventually they simply ran out of enraged activists to wade through the crowds and disrupt things. So the police are to be greatly commended for maintaining the peace in the face of such provocation. Of course this contrasts markedly with how they performed – or did not perform – five years ago. Then the ferals ran riot, and the police did absolutely nothing to prevent them from disrupting our meeting, assaulting marchers, and blocking our route. I wrote about all the gory details of this at the time: billmuehlenberg.com/2013/10/12/choosing-death-choosing-hate/ But many of us made a very big stink indeed about this back then, and since then the police have been terrific – keeping the rabble away from us, and intervening with the ugly militancy when necessary. So thank you Victoria police for doing such a great job today. 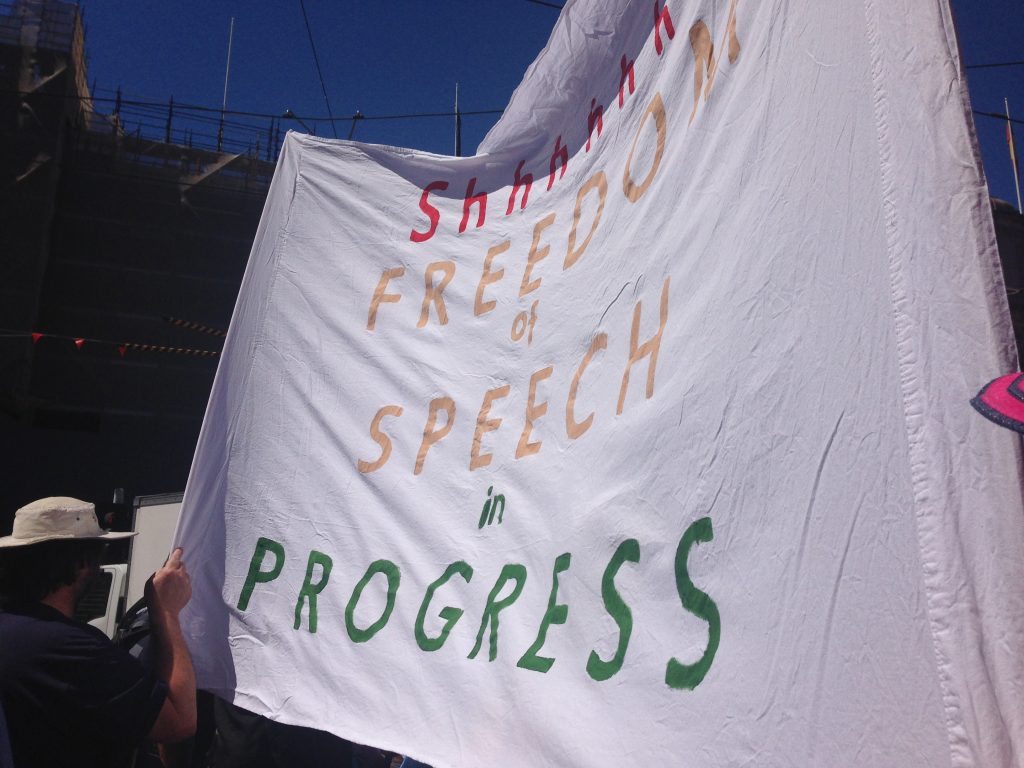 As to the media, they were most conspicuous by their absence. The only film crew I could see was from Channel Nine. As they walked back and forth, I felt like saying, “Hey, you can interview me. Or better yet, interview the prolife doctor standing next to me”. On the 6 o’clock news tonight the march led the bulletin. Of course the emphasis was on confrontation, and they spoke of “hundreds” of prolife marchers. Um, there were far more than that. But they did get it right that only a relative handful of militants were there, and they showed some of them being taken away by police. The news item also informed viewers that at least two knives were seized from the militants. Wow. So much for the peace and love brigade. That really is rather frightening indeed that this is what we now must contend with. But the march organiser Melbourne MP Bernie Finn was briefly interviewed, along with a few prolife marchers, and Dan Flynn from the ACL. So all up it was a fairly decent report from the mainstream media. Miracles still happen I guess. However none of the speeches were covered unfortunately. And there were some great ones. Bernie of course spoke, as did champion prolife politician Rachel Carling-Jenkins. Neil Angus, another politician, gave a brief address, along with visiting American, Cardinal Burke. But perhaps the highlight of the day was a somewhat nervous speaker, but one that did a tremendous job: 15-year-old Anna. She should not have been there. Her mother was a rape victim, and in so many cases women are told to abort children conceived in rape.   Although she had scheduled to have an abortion twice, thankfully her mother did not follow through, and young Anna today gave a stirring and memorable talk. She told the thrilled and appreciative crowd, ‘I am here to tell you my life is worth living’. She said that her mother was unemployed, struggling and alone back then, but that was not a reason to have an abortion. And as her mother has said, “Not a day goes by that Anna does not remind me of the preciousness of life itself, and not a moment goes by when I look at Anna and think how absolutely gorgeous she is.” Just one of her lines would have been so important to hear on the news tonight. But the media prefers controversy it seems. Nonetheless, her talk and all the others were video-recorded by my friend, so we may soon see them on YouTube. A million thanks to all those who attended, to the organisers, and to the police who protected us. With those angry, demonised pro-death protestors, some of them with weapons, who knows what might have happened had the police not been there. I think the fact that they actually showed up at our rally with some deadly weapons tells us all we need to know about the pro-abortion left. That is, if their screaming, thuggery and intimidation had not already told us what we need to know. Each year when we have these marches – and other events like it – and the rent-a-crowd of incensed activists show up, I am always struck by just how utterly consumed they are with hatred. They not only celebrate and love the idea of killing babies, but they absolutely detest those of us who seek to save babies and promote life. This is without doubt an indication of deeper spiritual battles, and one can only pray for them and engage in some spiritual warfare. Reasoning with them seems to achieve nothing – as the elderly couple we tried to discuss things with indicated. They prefer to just emote and show their anger, rather than actually engage in any sort of serious dialogue and discussion. Sadly all over the West we are seeing these sorts of things happening, with mobocracy in action. Increasingly we find mobs rioting and running amok on the streets. And the abortion debate is just one small part of this. Things are getting very dark indeed and increasingly risky. Thankfully today no prolifers found themselves in hospital with stab wounds. But I really do not doubt that it will not be much longer before we such things occurring. But I will not be deterred by the haters and the bullies and their ugly intimidation and threats. I will keep marching each year. I look forward to seeing you next October at the 10th annual March for the Babies. And one day we will march to celebrate the end to this barbarism, just as we now rejoice in the end of slavery. www.9news.com.au/2018/10/13/18/01/melbourne-pro-choice-rally-clash-pro-life-campaigners-victoria-politics-abortion-rights
Tweet
Tagged under
Download attachments: