Irish politician: "Real healthcare does not have a victim" 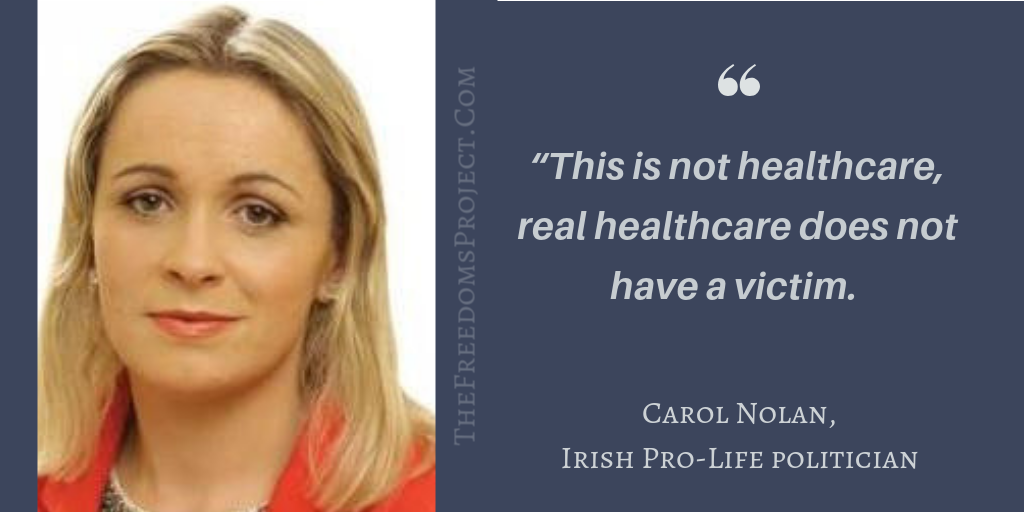 One courageous TD [Lower House parliamentarians are known as 'TD's, for Teachta Dála], Carol Nolan, gave impassioned speeches last week, despite fierce opposition from pro-abortion TDs who have sought to discredit and disrespect the pro-lifers at every turn. When TD Nolan went on to describe a first-trimester abortion procedure in detail, her comments met with resistance from pro-abortion TDs. Richard Barrett accused her of using language that is like graphic posters which are 'designed to induce trauma, fear and shock'. Louise Reilly said Nolan's comments were 'dripping with judgment and a kind of visceral hatred of those women.'

Carol Nolan resigned from her party, Sinn Féin, in June. She had been on suspension for refusing to support the bill to repeal the Eighth Amendment - the bill that ultimately saw abortion legalised in Ireland. At the time, Deputy Nolan issued this statement:

“I do not want to have any hand, act or part in bringing about the end to the life of an unborn child, the most vulnerable in our society. It is not for politicians or society, in general, to decide who lives or dies.

“Every life is precious and every child deserves the chance to live. I don’t believe that abortion is the solution to any crisis. How can it be when it takes the right to life away from the unborn?

“I cannot and will not support abortion and for that reason I have made a decision to leave Sinn Féin.”

Another member of Sinn Féin, Peadar Tóibín, also resigned after a six month suspension. Mr Tóibín said he "lost speaking rights, spokesperson's positions, portfolios"  and was "significantly censored in ...  engagements with the media" because he voted against his party on abortion. A third politician, Peter Fitzpatrick,  left the formerly pro-life Finn Gael because of that party's support for the repeal of the Eighth. Fine Gael is Ireland's governing party, and its leader, Taoiseach Leo Varadkar, announced the referendum as soon as he was elected. Mr Fitzpatrick sat on the Oireachtas Committee on the Eighth Amendment and wrote the minority report, in support of the sanctity of life.

All amendments were voted down

Despite pleas from pro-life politicians, who presented evidence that their constituents were in favour of amendments, none so far have  passed. Amendments around a ban on sex-selection, abortion on the grounds of disability and pain relief for babies were voted down, echoing similar votes on amendments to unrestricted abortion laws here in Australia. An amendment to allow mandatory ultrasounds was also put forward and rejected. The pro-life politician who put forward the suggestion also brought up the subject of post-abortion grief. Pro-abortion TD, Lisa Chambers, retorted that "Abortion regret is made up and it does not exist." [Video from parliament shows that she said: "Abortion regret is a makey-uppy thing. It doesn't exist."]. Intelligent. Perhaps the most contentious amendment was to seek a ban on public funding of abortion. Carol Nolan put forward an amendment which sought to protect Irish taxpayers from funding abortions. Ms Nolan asked why taxpayers would be forced to  "fund a service of forcing a fatal act on others who have done no wrong". She stated:

"I ask Members to think about that and what it is we are talking about forcing people to pay for here. This is not health care. Real health care does not have a victim but abortion does."

Now- Independent Peadar Tóibín, said he had had people come up to him in the street expressing surprise that the service would be State-funded. He also suggested that funding abortion services would mean less money for other parts of the health service. “If you take €12 million out of one budget to pay for this, it will mean that there are certain operations that won’t happen.” Health Minister, Simon Harris, has been under fire for failing to provide a decent standard of healthcare for existing patients, while promising to provide abortions for free. There is also evidence to suggest that Harris, who was elected on a pro-life platform, has ties with the abortion industry, and stands to gain from the legalisation of abortion.

Deputy Michael Healy-Rae challenged Harris' change of stance from pro-life to pro-abortion during the amendment debates. Healy-Ray drew attention to a petition signed by 450 nurses and midwives requesting that pain relief be administered to babies before are killed in a late-term abortion:

... I saw the horror and shock. I saw how the Minister tried to interfere with the Acting Cathaoirleach [Chair of the Upper House]. He tried to stop Deputy Mattie McGrath from reading out this letter [petition]. Other people may not have noticed it. In case anyone was not looking at the Minister, he badgered the Acting Cathaoirleach to try to stop Deputy Mattie McGrath from reading out this letter. The Minister refused to accept a copy of the letter when it was given to him. This happens to Ministers every day; they are handed letters. The Minister did not want this letter because it contained the commitment and promise he gave to the electorate when he said he was pro-life. He has gone a long way from that now, but he showed an awful lot when he showed how shocked and horrified he was at the idea of Deputy Mattie McGrath reading into the record of the Dáil the letter the Minister sent to thousands of people saying, "Dear pro-life campaign" and signed "Kind regards, Simon". Well Simon has changed an awful lot since then.

Potassium chloride is an extremely corrosive and painful thing to have going into anybody. All we are asking is to have pain relief for that. My God, it does not get any simpler or more humane than that.

Pro-life and pro-abortion politicians introduced a total of 65 amendments, and the protracted and contentious debate could mean that the abortion law, which the government had promised to be enacted by January 1, may not be settled by then. Despite this, Health Minister Harris has ordered the Health Service to make sure that its 19 maternity units will be ready to provide abortions from January and promised that a 24/7 'helpline' will be available then. Debate is expected to slow even more as parliamentarians begin to discuss amendments centred around conscientious objection of medical professionals this week. Training of Ireland's new baby-killing professionals begins on December 10th.

Transcript of one of Carol Nolan's speeches in Parliament

"I just want to begin by saying that I find it so sad and frustrating that deputies came into this chamber - one deputy in particular - and made very wild accusations and damaging my reputation, by saying that this was coming from a business man. I can assure everybody here in this house: it absolutely did not. I have conscientious objection, (pauses) as does my colleague beside me. We were forced out of that party. that you represent and how dare you come in and try and destroy me and my character. and make accusations like that. No, I'll continue on because I believe - I believe - there should be respect shown here. I uphold fully the principles of equality. There are those of us who are taxpayers that have stated we're very strongly opposed to abortion. Hundreds of thousands of those are women. And we all know that 723,000 people voted "no." Including, you know, that there's people with objections to this that were "yes" voters. I'm merely, as a representative, trying to convey those issues, those problems, those concerns that people have, and I'm being obstructed in this chamber from doing my work as a representative. And I think it's a disgrace and I just want to put that on the record.... "....We're told that the cost of abortions will be a very small percentage of public spending. If victims were anyone other than unborn children, no such point would ever be raised. It's not much of a point, Minister, when 100% of the cost of abortions will be paid by taxpayers. Those of us who have serious conscientious objection. But then again, two of us here have left our party because of conscientious objection, and Finn Gael TD ahead of us has also done the same. That shows the lack of respect and regard for pro-life TDs in this chamber."