The Attack of the 50 Foot Trans Tyrants 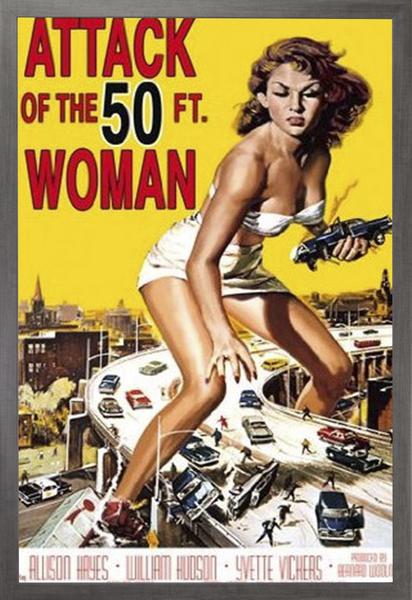 Consider just one memorable low-budget film as an example. In the 1958 B film “Attack of the 50 Foot Woman” we had this perfectly plausible plotline: a jealous woman who happens to have been turned into a giantess by an alien takes revenge on her philandering husband, killing him and his new hussy along the way, before meeting her own untimely end. Hmm, sounds perfectly legit to me – shoulda been nominated for at least something at the Academy Awards! Alas, it won no Oscars or Emmys or anything else as far as I am aware. But it still has a committed cult following. If the story line might seem a tad hard to believe, it surely is far more realistic than the moonbattery coming from the trans mafia. Indeed, all of this trans madness is now as ubiquitous as it is bizarre.
But it is not just its sheer lunacy that is so mind-numbing: it is having some very real negative consequences on plenty of folks, just as the poor husband and his chicky babe bore the brunt of the 50 footer’s rage. Get a load of some recent attacks by the 50 foot trans militants. Well, they may not be quite that tall, but they are leaving their mark just as effectively as if they were. I just learned of the first example moments ago, and it is a real lulu: it seems one young popular gamer has been given the flick for daring to suggest that as a matter of basic biology, you are either male or female. One write-up puts it this way:

A popular online gamer who regularly broadcasts on streaming platform Twitch claims she has been permanently banned from the platform for stating her “beliefs” that “there are only two genders”. HelenaLive says her partnership with the video game streaming platform — owned by Amazon — was terminated and her account shut down after her comments were deemed “offensive toward the transgender community”. The website lets gamers broadcast their live action to fans, which typically includes a split screen so viewers can see the player as well as the gameplay. Users can be banned for a range of indiscretions ranging from overtly skimpy outfits to offensive speech. In an email from Twitch, later posted online by HelenaLive, the streaming service said it was her third strike in as many months, citing she had been reported twice “for hateful conduct in the last two months”. www.news.com.au/technology/home-entertainment/gaming/gamer-reportedly-banned-from-twitch-for-claiming-there-are-only-two-genders/news-story/80d33347cc41fae6959d45d5d6eead82?fbclid=IwAR2cK2-I7XvZ4jPb3d3K8MjQHbqAt_a2bG-83PXyTyd-ZFNSh_dcjJaFHDY

Hmm, “I believe in biological reality.” “You are a hateful bigot – die scum die!” Um, are we sure this is not just another Hollywood flick? Sadly it happens to be all too real. And since we are dealing with really hateful young women, let me mention another. The headline is another ripper: “Young mother is barred from her local pub for wearing a T-shirt saying ‘Woman: human female’ after a complaint that it discriminated against transgender people.” OK! The report opens:

You might have thought it was the most innocuous item someone could wear: a simple black T-shirt bearing the dictionary definition of woman as ‘human female’. But a young mother has been barred from her local pub after a complaint that the words discriminated against transgender people. The unlikely new front line of the ongoing war between feminists and transgender campaigners is the snug Five Clouds Tap and Bottle in the historic market town of Macclesfield. Rebekah Wershbale said she was ‘stunned’ when a barwoman at the pub informed her she was banned because of the definition. Ms Wershbale said: ‘She told me that the T-shirt I was wearing was upsetting people because it was transphobic and not inclusive so I was barred. What she meant was that I was somehow offending men who say they are women because my T-shirt did not include them in the definition of a woman. There aren’t even any transgender staff or patrons at the pub. It’s crackers.’ www.dailymail.co.uk/news/article-6561259/Young-mother-barred-pub-wearing-T-shirt-saying-Woman-human-female.html

Oh dear. But wait, there’s more. One other recent headline is also worth checking out, as we ask if this too is the stuff of a new B movie: “D.C. restaurant fined $7,000 after asking transgender woman for ID before letting her use bathroom”. I kid you not. The story goes this way:

A D.C. restaurant will pay $7,000 as part of a settlement after an employee tried to stop a transgender woman from using a women’s restroom last summer, D.C.’s attorney general said this week. Charlotte Clymer, a transgender woman and activist with the Human Rights Campaign, which advocates for LGBTQ equality, was asked to show identification June 22 when she tried to use a women’s restroom at Cuba Libre, a downtown Cuban restaurant and rum bar. Clymer said the employee followed her into the restroom, then a manager also asked for identification when she emerged from the restroom. After a confrontation with the manager — at which point she pulled up the D.C. Human Rights Act on her phone — she said she was told to leave, and then called police. The D.C. Human Rights Act prohibits discrimination based on gender identity or expression in housing, employment, public accommodations and educational institutions. www.washingtonpost.com/local/dc-news/dc-restaurant-fined-7000-after-asking-transgender-woman-for-id-before-letting-her-use-bathroom/2019/01/17/00d1fc6e-1a86-11e9-afe1-7bd2532c9988_story.html?noredirect=on&utm_term=.c6795b12c194

OK, whatever. In these el cheapo sci fi movies reality is replaced by fantasy. It is strawberry fields forever, where nothing is real, and nothing to get hung about, to borrow a line from some long-forgotten pop group. But if I have to choose between guys wearing dresses who think they are female, and a jealous 50 foot woman, I think the latter might get my vote. If so many people were not being so adversely impacted by these trans tyrants, all this might be good for a laugh. But this is serious business, and things are getting out of control real fast. As American Paediatrician Michelle Cretella put it:

Transgender ideology is not just infecting our laws. It is intruding into the lives of the most innocent among us—children—and with the apparent growing support of the professional medical community. As explained in my 2016 peer reviewed article, ‘Gender Dysphoria in Children and Suppression of Debate,’ professionals who dare to question the unscientific party line of supporting gender transition therapy will find themselves maligned and out of a job. www.lifesitenews.com/opinion/pediatrician-transgender-ideology-has-created-widespread-child-abuse

Even the medical community is not exempt. I don’t know about you, but when I go to see a doctor, I want someone who is grounded in reality. MD’s with both feet planted firmly in mid-air are just not going to get a visit from me. The same with most of my other normal activities. When I hop on a plane to head elsewhere, I want the pilot to actually believe that a dependable jet in fact has a left wing and a right wing. If he thinks it can get by with two left wings, good luck to him, but I sure ain’t flying with him. I would rather take my chances with the 50 foot woman. Will no one deliver us from all this B film trans madness?
Tweet
Tagged under
Download attachments: