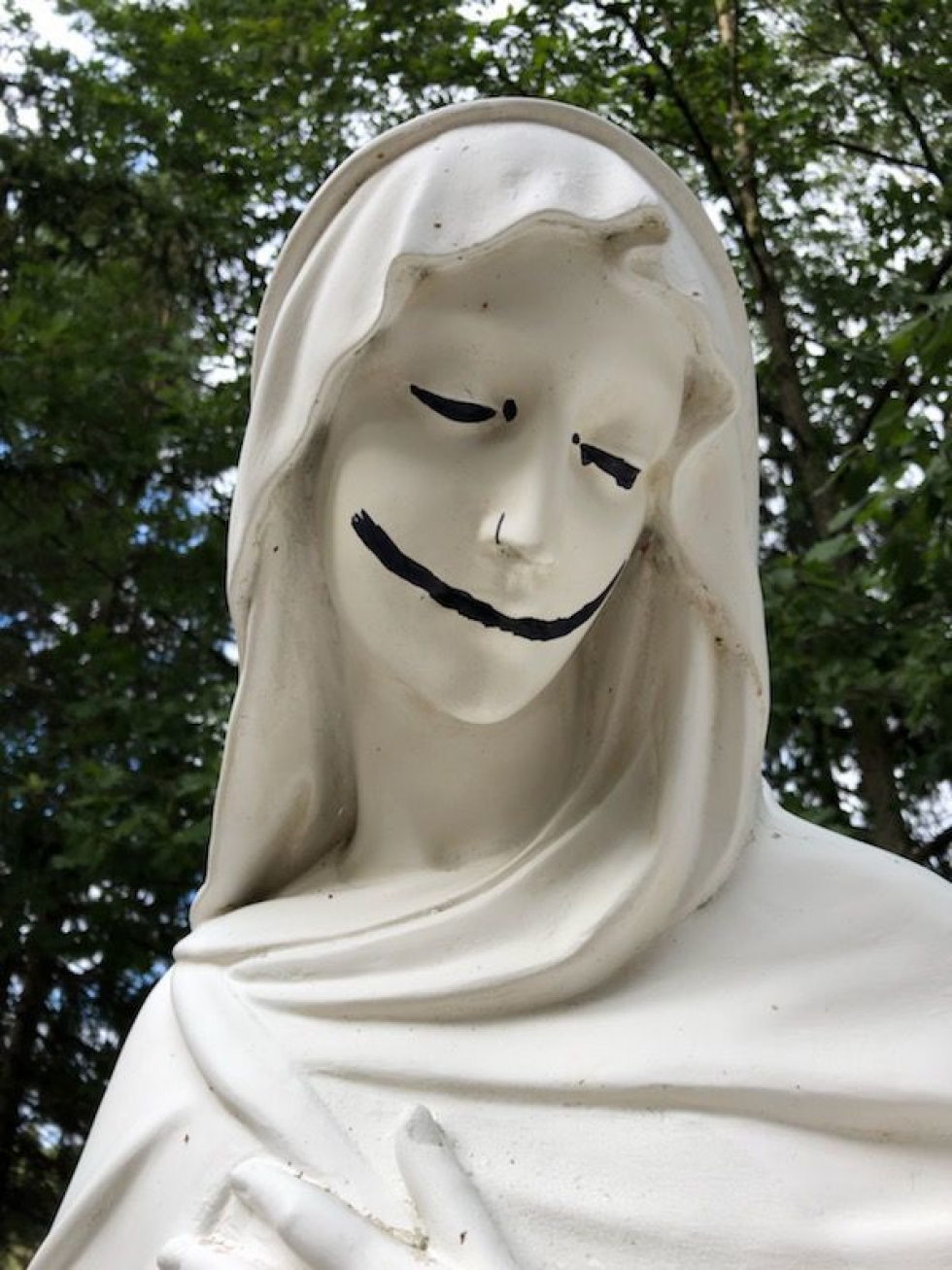 The Cancel Jesus Project is well and truly underway.  The killing of the statues proceeds apace.  The attentions of the revolutionaries have already turned to Christian icons.  Killing God is an old project.  We are now witnessing the final phase.

The Cancel Jesus Project is well and truly underway.  The killing of the statues proceeds apace.  The attentions of the revolutionaries have already turned to Christian icons.  Killing God is an old project.  We are now witnessing the final phase.

Everything else has been cancelled.  How long can the Son of God survive the earnest efforts of the frontline revolutionaries and their useful idiots?

The long march, or actually a fairly short march, through the statues, has now touched the remnant Christian world, diminished and craven as it is in these post-Christian times.

As reported by The Federalist:

Shaun King, a prominent left-wing fundraiser and activist, endorsed the destruction of religious icons and statues in which Jesus appeared “white.” He described the artwork, which includes some of the most recognizable pieces of art in the Western canon, as tools of white supremacy.

Why stop at Captain Cook or Columbus, rampant colonialists that they were?  (Actually they were mere functionaries, explorers, and not colonialist decision makers.  And their bosses were powerbrokers engaged in the power struggles of their day.  But that does not matter, in these enlightened times).

It was only a matter of time that the revolutionaries would come for Christ.  White male colonialist.

The progressive hoovering and convenient, ill-informed post-hoc cleansing of history is on a roll, and will likely stop at nothing.  It only a matter of time till Christ is cancelled.  Oh, wait a minute.  Nietzsche declared some time back that God was dead.

“God is dead. God remains dead. And we have killed him”.

Rousseau, the architect of the French Revolution and, wittingly or not, of the bloody Jacobin  massacres the followed, prefigured Nietschke.  Voltaire, David Hume, and the rest contributed massively to the project of cancelling Christ.  The contemporary followers of the older philosophers, second hand dealers in ideas, like AC Grayling, the airport bookshop philosopher, and his ilk, are merely seeking to complete the core Enlightenment task.

These insane and evil times in the early twenty-first century are merely undertaking the mopping up operations.  Hosing out the putrid stables of Christian belief.  Putting clear air between enlightened us and all that ancient bullshit.

Churches and their cultural associations are now the mere remaining, annoying spaces of a bygone era of prejudice and “medieval” superstition.  Those that haven’t been converted into cafes, or mere tourist attractions, emptied or the worshippers that no longer exist.  Those still functioning Christian spaces are all but empty, as former believers march out the door, for all the reasons they rationalise.

The latest statues putsch is merely the latest strategy in a long campaign.  It is one component in a co-ordinated plan to exorcise the ghosts of our sinful, politically incorrect past.  (It is interesting that those who would deny the notion of sin are so concerned with sin).

Christmas trees have all but gone in the public square.  The latest is Perth City Council, as we speak.  The enlightened City of Perth has seen the light.  Non-Christians might be offended.  By a Christmas tree!  Hardly a core Christian symbol, notwithstanding St Nicholas’s peerless generosity to those in need that actually started the tradition.  Generosity and fellowship might be thought to be a universal aspiration and strategy for wellbeing, but no matter.  The annual Christmas wars have taken their toll.  The Lord’s prayer disappears from parliaments.  All Christian symbols must go.  The wearers of secularist jackboots will not be denied.

Which brings us to Jesus.  He was certainly a colonialist.  His final commandment, delivered on Mt Olivet as he ascended to heaven, was “go and teach all nations”.  Oops.  Not too politically correct there.  Off the Apostles trotted.  St Paul covered the Mediterranean and Asia Minor, as it then was.  St Peter went to Rome.  St Phillip went to Africa.  St Thomas covered India.  Saints Martha, Mary Magdalene and St Lazarus – he who died twice – went to France, as legend has it.  Colonialists all.

Admittedly, the Church fathers were lone rangers, lacking the power of a Christian state and empire.  Indeed, they were killed for their efforts.  State came later, with Emperor Constantine and the power of the Roman Empire.  Real capital C colonialism.

The Saviour didn’t mention “be careful not to offend the locals where er’ you go”.  Go easy on them.  They have their culture.  They deserve our respect.  Don’t offend them, whatever you do.  Don’t tell them they were wrong.

Christians clearly have a colonialist problem, then.  But now it is a post-Enlightenment moral relativist problem.  Ask Israel Folau, not a colonialist, certainly, coming as he does from the “third world”.  Merely a moral colonialist.  He was cancelled for preaching a core Christian message about sin.  OK.  The modern liberal has re-defined sin.  The Christian notion of sin doesn’t work for us.  So bugger off.

Ask any of the saints and martyrs who set forth to win souls for heaven about colonialism.  Christian missionaries went forth, as commanded.  They converted, or at least attempted to convert, souls that were lost or were unaware of the Christian message.  The mighty St Paul, The Theologian, took his message to the heart of the pagan, gentile world.  He won some battles, and lost others.  The stuck up philosophers of Athens laughed at him.  His success rate, despite all this, was impressive.  He created a Christian world.  Almost single-handedly.

Can the Christian spiritual mission be separated from colonialism?  It might be argued - you cannot convert someone in a non-colonialist way.  It just ain’t possible.  You are saying to the potential convert – your previous life doesn’t work.  Your life – not your Aboriginality.  See how things can get confused?  Such nuances will never get in the way of a concerted anti-Christian mission.

Hence the modernist attack on the core Christian mission to convert the world, portrayed as a colonialist enterprise.

But, wait, there is a problem with the postmodernist misconception of Christian colonialism. The Christian command to go and teach all nations is a spiritual mission, not an attempt at imperialist aggression. “Give to Caesar what is Caesar’s”.  The Christian God doesn’t have a geopolitical masterplan.  It is not His intent to play earthly politics.  Christ’s command was not “go and submit colonial victims to imperial rule”.

This misconception has not troubled the statue destroyers of today.  Subtleties don’t count here.  Spiritual colonialism doesn’t cut it in these times.  Jesus was a white male, after all.  Implicated in the whole patriarchal thing.  Enough said.

Christian evangelism was associated in a temporal way with colonialist expansion, certainly.  Inevitably, perhaps.  Christian missionaries went to foreign lands.  They set up shop, with or without the help of colonialist powers.  And so Jesus’s mission got caught up with colonialist regimes, governance and methods.

In the meantime.  Let’s just kill the statues.  We have killed God in principle.  Let us mop up the remnants of a Christian civilisation.  Of a Christian culture.  Of Christian thinking.

Those who think that this is merely an issue of freedom of speech, even freedom of conscience, have missed the purpose of the mission of the post-Nietzschean, kill-God zealots, or have chosen to ignore it.

The game is to destroy Christianity.  Not just to prevent Christians from exercising their democratic rights.  Freedom fighters who merely fight for freedom and do not see what we are ultimately fighting for will not save a civilisation.

In the meantime, the Christian statues will fall.