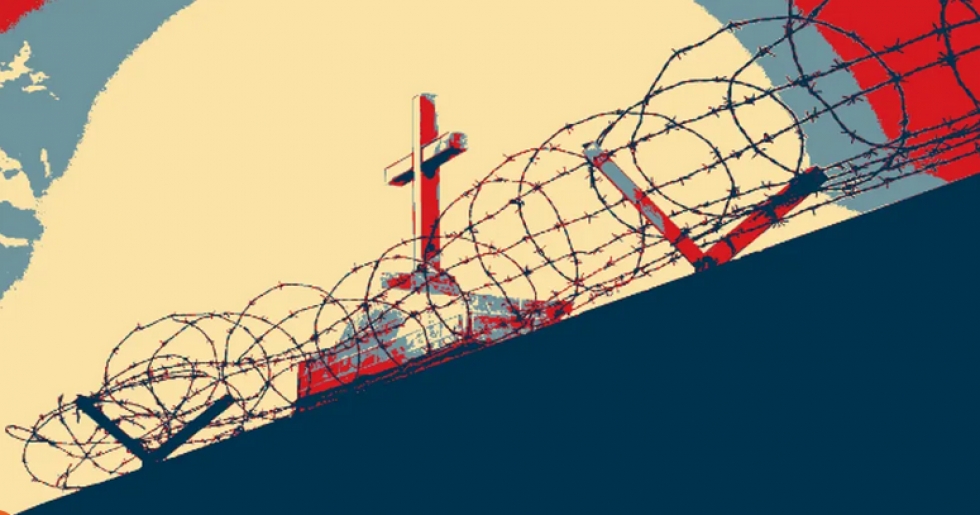 The Catholic Premier of Victoria seems hell bent on shutting down churches, and especially the Catholic Church.  The fightback, though, is under way.

Melbourne’s five million residents have been under the world’s longest-running COVID lockdown since early August, leaving churches closed with Catholics unable to attend Mass. Baptisms are banned, confession is not available in some parishes and until the Archbishop intervened last month, it was prohibited for priests to give dying Catholics the Last Rites.

The state government, under Premier Daniel Andrews, has implemented various stages of restrictions since March and recently announced its “Roadmap” to “Covid-normal” aimed at opening up the State in a manner deemed by it to be compatible with public health concerns.

In light of the initial reports about the coronavirus pandemic from overseas, some of the restrictions put in place by the Andrews government may have temporarily been justified. More difficult to justify is the continued closure of churches and other places of worship, especially when contrasted with a relaxation of restrictions on businesses in regional areas.

In regional Victoria, where COVID cases have never approached numbers seen in the Melbourne area, Step 3 of the Premier’s Roadmap has just been updated. Under Step 3 regulations, cafes and restaurants are now able to seat forty people indoors and seventy outdoors, but places of worship are allowed only outdoor gatherings of twenty people. Indoor church services are not allowed at all and it will be two weeks before Melbourne’s people of faith can enjoy even these limited freedoms.

Yesterday’s announcement from Daniel Andrews regarding the supposed loosening of restrictions in Melbourne has drawn criticism and disbelief from many quarters. Archbishop Comensoli shared his thoughts on social media:

“I am deeply shocked and disappointed at the disparity imposed on people of faith in Victoria today. The Premier’s announcements on the further easing of restrictions completely ignore the mental and spiritual wellbeing of many, with public health officials stubbornly silent on the reason why. From tomorrow, restaurants and cafes in regional Victoria can have up to 70 people outdoors and up to 40 people indoors. Libraries can open for up to 20 people indoors.

“And yet, places of worship will remain closed and outdoor religious gatherings are capped at 20 people plus one faith leader. Where is the parity?[1]

“The rest of Australia is doing it right. Why not us? Life, family and faith matter.”

The discrimination being experienced by churches prompted two Catholic laywomen to start a campaign which they hope will bring media attention to the issue. Their campaign now has the support of several large Catholic groups, including FLI, as well as representatives from other denominations and faiths. The first stage of the campaign was a petition which quickly reached eleven thousand signatures and which was presented to the Premier last week.

Several mentions in Victoria’s parliament drew further attention to the government’s discrimination against people of faith. Brad Rosewell MLA mentioned the petition in his Lower House member statement last week, and it was also raised by Matt Bach MLC in the Upper House. Additionally, Neil Angus MLA asked the Premier a constituency question regarding the issue, referring to the petition as well as to an open letter[2] from 295 evangelical pastors asking for their churches to reopen. Constituency questions must be answered in writing by the Premier within 30 days.

The petition highlights the way in which Step 3 restrictions prevent Christians and other persons of faith from accessing their places of worship while allowing businesses to reopen – albeit in a limited fashion. It cites the fact that the wellbeing of Victorians depends on their ability to practise their faiths, with almost two-thirds of residents describing themselves as religious. The petition also states that religious communities are able to conduct their services in a “COVID-safe” manner, emphasising that their venues are large enough to enable their members to maintain social distancing. It draws attention to the fact that when restrictions were eased after the first lockdown, places of worship were subject to the same restrictions as were other buildings, whereas this is not the case as Victorians come out of the second lockdown.

Fr Marcus Goulding of St Bernard’s Parish, Baccus Marsh has become the spokesman for the Equality for Faith campaign. Fr Marcus realised that it was necessary to keep media attention on the government’s religious discrimination and felt that gaining support from other faiths would be helpful to achieving that end. To date, member groups include the Greek Orthodox and Presbyterian churches, as well as the Islamic Council, Hindu Council and the Brahma Khumaris. Speaking to FLI, Fr Marcus said:

“I’ve been really impressed by the support we’ve had from local people of faith and the broader range of faith-based organisations and churches. One of the positives that has come from this campaign has been that people of faith have spoken with one voice.

“It’s very clear that people of faith and places of worship are being unjustly and inequitably treated by the Roadmap, and the Premier has provided no reason why we are being treated in this way. Last Sunday we heard in the Gospel that we are to render unto Caesar what belongs to Caesar and to God what belongs to God.

“But yesterday’s announcement showed the government is not negotiating in good faith; in the words of Archbishop Cordileone [of San Francisco], these restrictions ‘mock God.’ We now have no choice but to take more significant measures to achieve equity.”

It may be providential that the Gospel story of Caesar’s coin was read in every Novus Ordo parish this past weekend; as George Cardinal Pell once wrote, “…we can properly render to Caesar what is Caesar’s only if we render to God what is God’s…”[3]. The current situation in Victoria makes it impossible for every Catholic to give God the homage they are obliged to render to Him. FLI spoke to two other Melbourne priests about the unfairness of the current restrictions on Catholics. Both priests noted the hypocrisy of the government’s stance, claiming it wants to “save lives” while also allowing abortion on demand and assisted suicide.

Fr Glen Tattersall, parish priest of Newman Parish in Caulfield, had this to say:

“The Andrews government and health department bureaucrats have never even attempted to explain how the closure of places of worship (entry to the public being forbidden even for private prayer) is essential, or even helpful, in the fight against Covid19. Andrews himself, as a bad Catholic who has spent his public life promoting and introducing abortion on demand and more recently euthanasia, as well as criminalising the seal of Confession, clearly has a problem with the Catholic Church in particular. At the beginning of this manufactured crisis, he pointedly vowed: “There will be no Mass on Easter Sunday!”

“Characters such as Andrews, who claim to believe in a radical separation of Church and State, in fact hold that this doctrine should only operate a one way direction: that is, the Church must have no place in the public square. However, Andrews doesn’t hesitate to use all of the power of the State to interfere with and bully the Church. I welcome this petition from the broadly based grassroots of the Victorian community, to secure for all the recognition and exercise of our civil rights in relation to religion and public worship.”

Fr Nicholas Dillon, parish priest of St Phillip’s Parish in Blackburn North, pointed to the heartfelt suffering being endured by his parishioners:

“The impact on people of the lockdown in metropolitan Melbourne has been immense. The public have almost daily been warned of a “wicked enemy” lurking across the city. Alarmism seems to be a popular tactic in politics these days. Instead of a truly proportional response to a health issue, we have witnessed a crippling series of restrictions that have seen the majority of citizens become virtual prisoners in their own homes.

“In a time when so many are seeking the consolation that comes from joining together in public worship, our churches have been forced shut. The brief period when we were permitted to have up to 20 worshippers present showed that it is possible for churches to function in a responsible way in light of the health advice. We will never know just how many tears have been shed by those silently weeping in their homes, yearning to return to the House of the Lord.

“The mantra we have heard from government leaders that the restrictions are about saving lives rings hollow when we consider the anti-life policies that have been enacted in Victoria over the past decade. Laws championing both abortion and euthanasia have shown that the culture of death is very prevalent in this part of the world. It would seem that there is indeed a wicked enemy prowling round Melbourne. Instead of curfews and lockdowns, however, we need to enlist St Michael to aid us in this battle.”

Life is very difficult for people of all faiths and none in Victoria at the moment. Victorians are rightly concerned about the physical and mental health of their loved ones, the economic ramifications of the lockdowns and about the totalitarian impulses of our premier. Places of worship must open again to provide hope and solace for the people of Victoria.

Church Fathers have pointed out the problems that arise when the rights of the Church are subject to the whims of the State. As Pope Leo XIII wrote, “… order is disturbed, for things natural are put above things supernatural,”[4] and he warned of the danger inherent in the two powers being pitted against one another.

In more recent times, and specifically referring to the pandemic, we are reminded:

“The Church has the right and obligation to pronounce moral judgement over nations in defense of the fundamental rights of man as contained in Divine Law. This claim can in no way be written off as belonging to a pre-modern set of circumstances. We find it also in Gaudium et Spes: “It is only right, however, that at all times and in all places, the Church should have true freedom to preach the faith, to teach her social doctrine, to exercise her role freely among men, and also to pass moral judgment in those matters which regard public order when the fundamental rights of a person or the salvation of souls require it” (GS 76).”[5]

We look forward to hearing Victoria’s bishops clearly, publicly and unequivocally “pass moral judgement” on the godless Andrews government on behalf of all people of faith and most especially on behalf of their Catholic brethren.

To support the petition, please go to this link on the Equality for Faith website: https://www.ipetitions.com/petition/faith-equality and you can stay up to date with the campaign here: https://www.equalityforfaith.com.au/