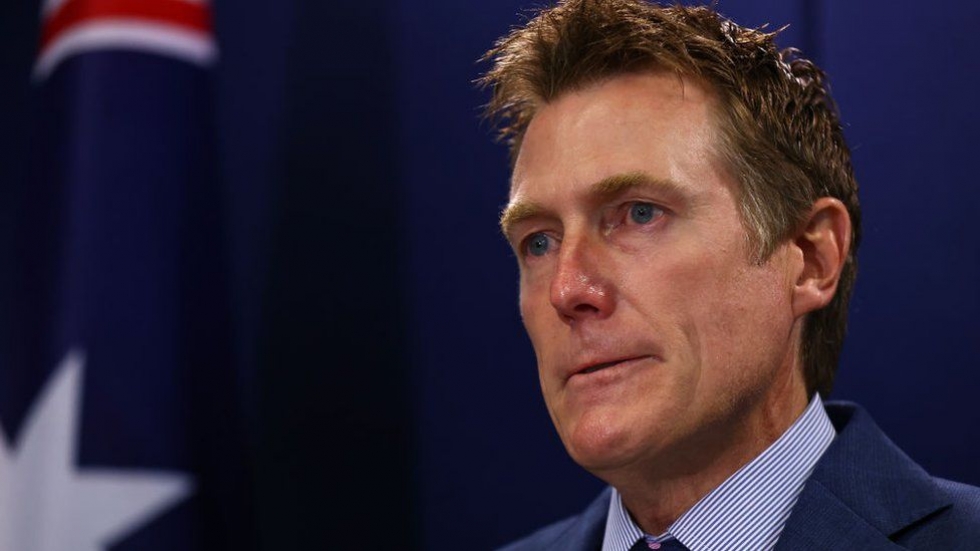 Undeterred by her eventually ill-fated attempts to crush George Pell, Louise Milligan set out to destroy Christian Porter.  On this occasion she had a different set of fembot collaborators who formed a self-styled "army" on behalf of a sadly deceased rape accuser.  An accuser who decided not to pursue her allegations against Porter, and whose family were strongly committed to putting the story to rest.

Undeterred by her eventually ill-fated attempts to crush George Pell, Louise Milligan set out to destroy Christian Porter.  On this occasion she had a different set of fembot collaborators who formed a self-styled "army" on behalf of a sadly deceased rape accuser.  An accuser who decided not to pursue her allegations against Porter, and whose family were strongly committed to putting the story to rest.

If at first you don’t succeed, as the saying goes.  Louise Milligan, the Australian Broadcasting Corporation attack-dog, came up short, in the end, with the Pell campaign.  A fresh campaign is upon us, and some of the strategies and tactics of the fembot attack machine are now coming into sharper focus.

As more comes out about the alleged Christian Porter rape of the complainant known as “Kate”, the more it becomes apparent that the purpose of the push against Porter has been, well, precisely to “have all these things come out”.

The Australian Broadcasting Corporation is becoming #MeTooist Law Central.  There is no high-profile ideological enemy that it won’t seek to bring down, given the right opportunity to inflict maximum pain and a perfectly positioned “victim”.  On the back of a moral panic over rape and sexual assault.  The methodology is as follows – find a credible complainant, then use the media and/or the publishing industry to publicly defame the target, whatever the ultimate judicial outcome, where there are opportunities for career, wealth, reputation and life destruction.  In a sense, whatever redress might be achieved for the “victim” – inevitably called a victim whether the allegations are proven or not – through the law enforcement/judicial system is almost incidental to the main game.  Gaol time is merely a bonus for the #MeTooists.  Guilt-by-accusation in the public domain is a blunt instrument to achieve vengeance for the accuser, with or without a legal victory.

The critical element of the strategy is to get the sordid details of the allegations, or some other element of the alleged events, out into the public domain where possible.  This is in order to poison the public’s view of the accused.  In the case of George Pell, it was Milligan’s strategically published book.  It was carefully timed to coincide with the complainant’s approach to the police, the details of whose investigation of Pell were also leaked to the media to gain maximum hit power.  A double whammy.  In Pell’s case, as many details of alleged crimes as possible made it into the Milligan book, but the killer blow was the sheer number of complainants and would-be complainants she unearthed.  This was the ace in the hole.  Make Pell out to be a serial abuser.  In the case of Porter, it was one particular detail of the alleged assault in particular that would be dynamite if and when revealed.  A detail gross enough that, when seen or heard, cannot be unseen or unheard.  The plan?  Game over for Christian Porter’s career and reputation.

How did the details of the allegations come to be in the public domain?

This happened as a consequence of the removal of Porter’s star barrister, Sue Chrysanthou SC, from his defamation action against the ABC, which was, in turn, the result of a separate case brought in the Federal Court.  One outcome of this case was the publication of previously unrevealed content of the diary of Porter’s accuser, which contained all the lurid details of the alleged incident all those decades ago.  A brilliant result for Porter’s antagonists.  Porter’s risk in suing the ABC for defamation was always that the all the hideous details of the alleged incident and of the subsequent sad events in Kate’s life would come out, and not to his advantage.  This presumably influenced his decision not to proceed with the defamation case after mediation, the loss of his key barrister at a critical time and the discovery by Team Porter of the details of the ABC’s defence of the defamation.  Ever more damaging information that would skewer Porter politically, maybe permanently.

Consideration of the critically important action against Chrysanthou brings us to Jo Dyer.  So, who is Jo Dyer?

Dyer will largely be remembered as the woman who managed, through the Federal Court, to get Porter’s star barrister thrown off the case.  Dyer was known to the woman who sat on allegations against Christian Porter for three decades then aired them privately with a select group of people, before, sadly, she took her own life.  But not before setting out a detailed game plan to get Christian Porter.  Jo Dyer was not a great friend of Kate’s, and not in any contact with her since they parted ways post-school.

Dyer is the #MeTooist from central casting, and hence superbly suited to her present role of flag-bearer for Team Kate in its quest for vengeance against the “entitled arseholedom of CP”, as the also-now-released text messages between Dyer and fellow Porter-pursuer, the ABC’s Annabel Crabb, attest.  Even more Milligan than Milligan, if that is possible.  A failed candidate for pre-selection for the Australian Labor Party.  An avid greenie – one of her heroes is Greta Thunberg – a progressive activist who worked for, then left, the Human Right Commission because it was “too bureaucratic” and not political enough.  A high bar, there.  Another of Jo’s heroes is the awful Nicola Sturgeon, Scotland’s First Minister and scourge of sensible centrists and conservatives north and south of the original River Tweed.  Jo fantasised about working on Elizabeth Warren’s presidential campaign.  She wants to leave coal in the ground.  And get tech companies to stamp out “fake news”.  Dyer is a self-described “frustrated political junkie” and “social media lurker”.  One of her first acts upon arriving back in Adelaide was to start bagging the Liberal Government on Facebook, which led to calls for her to be sacked.

Dyer is, these days, the Director of the Adelaide Writers’ Week, a known haven for wokedom and a hangout of the perennially left-of-centre.  When previously director of the Sydney Writers’ Festival, Dyer promoted events such as the following:

The Zeitgeist Series, puts writers and thinkers together to discuss the burning meta-issues of the day. Wednesday 6 March will see Rage, Rape and Revolution discussed by Sohaila Abdulali, Soraya Chemaly, Lucia Osborne-Crowley and Clare Wright.

She also sees refugee “journeys” and Aboriginal massacres and essential elements of her festival curation philosophy.

You just couldn’t make Jo up.

Kate chose wisely.  On Dyer’s own say-so, she started to recruit (perhaps) carefully selected old school acquaintances to form an “army” to ensure Porter never became prime minister.  Dyer, and the aforementioned Crabb are smart, credentialled, former school acquaintances of Kate’s who shared a feminist-politico desire to get Porter and were reflexively inclined to believe Kate-as-victim.  “We believe you”.  Louise Milligan, of course, is always a reliable antagonist of accused sex offenders and a trusted and pro-active friend of victims’ groups.  Another daughter of the revolution, Sarah Hanson-Young, acts as the legislative arm.  The Team was in place.

As Katina Curtis of the Sydney Morning Herald put it:

[Dyer] believes Kate chose people she had been closest with, partly in a strategic move about who she thought would step up for her but partly based on the powerful emotions they shared.

… The comment about thwarting political ambitions came because Kate was “clear-eyed about the [unlikely] prospects of a conviction” with very few allegations of sexual assault proceeding to trial and even fewer ending with guilty verdicts.

This perception, by the way, is by no means true.  As Margaret Kunneen SC has pointed out, around thirty per cent of cases of sexual assault that go to trial obtain guilty verdicts, an astonishingly high percentage given the problems of evidence with he said-she said incidents, often historical, and typically without confessions, witnesses or physical evidence.  Ironically, the tsunami of #MeTooism sweeping through the law enforcement and judicial systems state-by-state has had the perverse effect of reducing the conviction rate that inevitably follows when “filters” within Offices of the Directors of Public Prosecutions are removed.  In the past, in the days before the feminist legal revolution in Victoria and elsewhere, weak cases were not allowed to go forward.  Cases involving outlandish accusations, like those against Pell, made it to court only as a result of the feminist, “we believe you” revolution.

There can be no doubt that the pursuit of Porter is a political act, and was seen as such by the complainant before she died.  It is certainly considered political – in both a party political and in a broader ideological sense – by Jo Dyer.

There is little public demand for an independent inquiry into the allegations.  Porter’s Western Australian electorate is Pearce, held presently by a comfortable margin.  One newspaper characterised local interest in the Porter case as “don’t know, don’t care”.  On the other hand, there is a re-distribution on the way, so Pearce may well be in play, especially if more pressure were applied to Porter.  And the Government’s margin is wafer thin.  Whatever it takes, as someone (sort of) from the left of politics has said.

The question is raised – did Dyer set up Porter’s lawyer in the legal equivalent of a honey trap?  Did she use her federal Court action as a deliberate means of getting further details released about the allegations against Porter, to blacken his name yet more?  It’s a plausible hypothesis, to say the least.

Porter’s legal team has also upped the ante in a recent description of Kate, as Samantha Maiden has noted:

Christian Porter’s lawyer says the woman who accused him of rape was severely mentally ill and suffering from “hypermania”.

Cardinal Pell had, astonishingly, nothing but sympathy for the also troubled complainant whose actions all but ruined his life and reputation.  “He was used”, the Cardinal said.  There was also a deceased “victim” in the Pell case, of course, who, equally sadly, died of a drug overdose.  The latest revelations about the real mental state of Porter’s accuser, the circumstances of a deceased accuser no longer around and the methodology of the Get Porter Team, then, are eerily familiar.

And against the powerful zeitgeist, Bill Shorten must, all the while, be counting his lucky stars.