Our Surrender of Family Planning to God 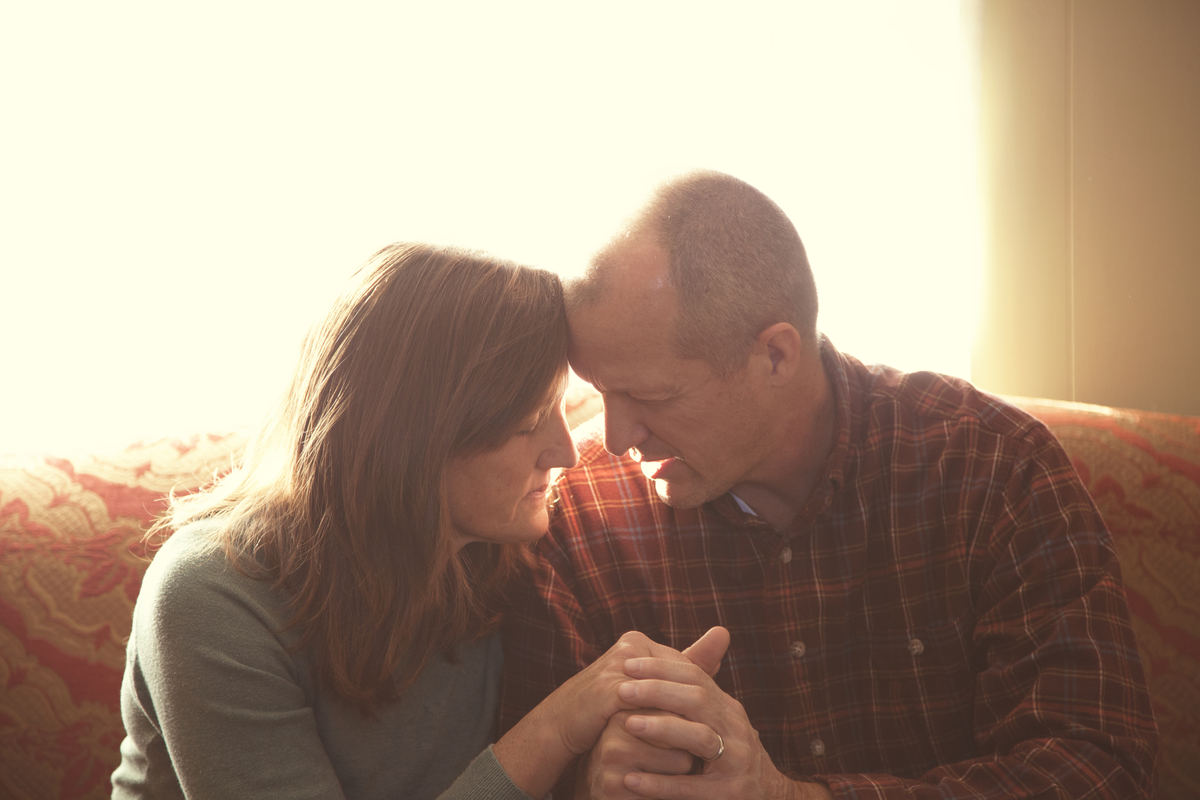 Occasionally I had qualms as I was aware that one of the actions of the mini pill was that it acted as an abortifacient. Also, as I had no period, it was quite obvious there was no lining of my uterus for a newly fertilised ovum to embed.

However when C (my husband) became a Christian in 1991, God quietly and gently at first, began to speak to me about taking the pill. My first thoughts were but God what will we do - we don’t want more babies. We have 3 children and that’s enough.

However in 1993, when I was 42 and C 45, God stepped up the ante. In May I had a massive bleed which didn’t stop until I lay down and rested for several hours. I thought that was odd and thought it’s because I haven’t been taking the pill religiously, daily, as I should. So the next month in June I was very careful to take every pill, but the same thing happened – another massive bleed. This was bizarre as in the previous ten years I had not been bleeding at all while on the mini-pill. So I went to see my GP who had no real explanation but said if it happens again he may need to prescribe anti-inflammatories to stop the bleeding.

I realised then that God was trying to get my attention and decided that I needed to be obedient and stop taking the mini pill which I did.

Then in July another massive bleed but this time it didn’t stop even when I lay down. I had been at work. I was in my own practice as a physio when I started to bleed. I was using folded up bath towels to catch the flow while my clients were unaware of what was happening. My receptionist rang the medical clinic and picked up a script for me. When she brought it to me I saw that it was hormonal and ignored the Dr’s orders and didn’t take it. I thought that I was trying to get off hormones…

I went home at lunchtime to lay down – by this time, I was actually squelching in my shoes from the flow of blood. I lay down but I was still bleeding. I began to feel faint…

I rang the GP and the receptionist asked how I was doing and when I said I was feeling faint she sent the locum GP around to see me. He took my BP which was 60/0 – he then rang an ambulance which took 40 mins to get there. Meanwhile he also rang my husband to meet us at the hospital and our church’s pastor who immediately activated a prayer chain. One lady was prompted to pray that I would not have an emergency hysterectomy, that my uterus would be preserved.

Thank God for that prayer!

On arrival at the hospital the Drs were baffled as to why I was haemorrhaging and said that if this is what happens when you come off the pill then I suggest you go back on it. I was told to take the medication that the locum GP had prescribed and I was hooked up to a saline drip to replace my blood volume. The bleeding stopped. I was very anaemic and was prescribed iron tablets.

As far as going back on the pill, my husband and I knew that God had spoken and I was to stop taking the pill.

I was lead to seek prayer ministry in the weeks that followed. I repented for taking control over my body when God’s gift of fertility was a blessing not a curse. I repented for distaining my period which was a beautiful sign and integral part of my fertility. God answered that prayer - the following month, and every period until menopause, was just a normal 3 or 4 day flow of blood with no associated cramping.

Initially C and I used condoms for contraception but on reading Genesis we read that when God created Eve for Adam, they came together as one flesh. We were convicted that this meant one flesh, without anything in between. So we surrendered family planning completely to God. Initially we were ambivalent about whether we had any more children. However when our first two pregnancies after our surrender ended in early miscarriages, I longed for another baby. When we went for nine months without another conception, I felt convicted to handover my deep desire for another child to God. Not my will Lord but Yours.

Almost at that precise time, I conceived once more and just 3 weeks ago we celebrated our beautiful daughter’s twenty-first birthday.

After our daughter, R’s birth, I had one more pregnancy that ended in miscarriage after I fell downstairs when I was 7 weeks pregnant. I broke my arm so underwent a general anaesthetic. Four weeks later I miscarried. **

What blessings do we deny ourselves when we do not allow God access to our fertility?

*My Pregnancy with R

I found out that I was pregnant with R in January 1996. My husband, C, and I were over-joyed, having had 2 miscarriages one after the other in early 1995, I had begun to think that there would be no more pregnancies for me. These pregnancies occurred after we had surrendered family planning to God in 1994 – another whole story. [See above]

One evening early in my pregnancy, my husband,C, turned to me and said I think that God has given me a name for our baby. I immediately asked, “What is it? It will encourage me in this pregnancy”. I was feeling quite anxious that I would miscarry again.

When we first surrendered family planning to God I had been completely ambivalent about having another baby – if we did, fine, if not, that was fine too. We were simply being obedient to what God had laid upon our hearts and miraculously confirmed. However, having had the 2 miscarriages, I now earnestly desired another baby. All quite amazing as I was 45 years old, C was 47 and our 3 older children were aged 19, 18 and 12.

C’s response to my question was “No I won’t tell you, God will…”  I was disappointed but allowed my unanswered question to rest with God. A few nights later as I was reading 2 Kings 22 the name “Josiah” resonated with my spirit and I said to C, “Is it Josiah?” He immediately came back with a surprised “What? Who told you?” A week or so later our 19 year old daughter, L, was telling a friend that her Mum was pregnant and that we thought that God had given us a name.  Without hesitating, the friend said, “A name has just popped into my head. Is it ‘Josiah’?”

So we believed that God had given us a name for our baby and assumed we were having a boy.

Fast forward about a month to my 12 week ultrasound scan. The results – increased thickness in the nuchal folds of the neck - suggested that I might be carrying a baby with Downs syndrome. I had already made it clear in my initial appointments that we would never consider abortion and therefore it was not even suggested. Nor were we interested in having an amniocentesis as there was a risk of inducing a miscarriage and we were ready to love who ever God gave us. However this screening test did put a cloud over my pregnancy and an unnecessary anxiety.

My pregnancy progressed well and there was no suggestion of Downs syndrome at my 20 week ultrasound. I asked not to be told of the sex of our baby at this ultrasound.We then looked forward to the birth of our healthy baby boy, “Josiah”.

Birth Day: 14th September 1996 – after a short labour, our beautiful baby was delivered and my first reaction as I looked at this brand new little one was, “God, you’ve left something off!” because I was gazing at a healthy baby girl not a baby boy as we had expected. As others exclaimed “It’s a girl!” I realised that I had given birth to a baby daughter.

In the days following the surprise birth of “R”, we wondered before God what He had been saying to us through the name “Josiah”.  We then did some further research and found out that the meaning of “Josiah” is “Yahweh heals”.

Had God been telling us that I would not miscarry, or that our baby would be healed of “Downs Syndrome”? Either way, He definitely confirmed His loving care of us in all circumstances.

At forty-seven years old I was ecstatic to learn that I was pregnant once again. Our children were aged 22, 20, 13 and our youngest, Hannah, was 1½ years old.  This new baby would be a most welcome playmate for Hannah.

When I was 7 weeks pregnant, I fell down a flight of stairs and broke my arm.  As I was falling, I felt that God was saying, “Your baby is safe”. However my arm was broken and the orthopaedic specialist advised that I needed an operation in order to wire the bone fragments together. I informed everyone caring for me that I was 7 weeks pregnant however no-one mentioned that a general anaesthesia may pose a risk to my unborn baby.

At 11 weeks I began to have cramping pain and spotting indicative of a threatened miscarriage. My doctor booked me in for an ultrasound later that day to check for the baby’s heartbeat. I was instructed to rest until the appointment. My pain didn’t seem to be settling… I prayed earnestly, I pleaded for the life of the baby I was carrying. I asked God if He could please tell me my baby’s name, I also asked that I would indeed be able to hold my baby. I meant, of course at birth at full term. The name I believe God gave me was “Timothy James”.

My fervent prayers continued all afternoon until it was time for my husband to take me to have the ultrasound. As I stepped out of the car, I experienced a rush of blood and I knew I was losing the baby. On entering the radiology clinic, I immediately went to the bathroom and as I sat to inspect what had happened, I caught my tiny baby. A short time later as I held my tiny baby and shared the experience with an extremely compassionate radiographer, I felt such love for this little one. He had a head, a body, tiny arms and legs; he fitted easily into the palm of my hand. He was my baby and I was holding him.  But too soon, way too soon… He was the size of a 7 week baby, the age he was when I had the general anaesthetic, not 11 weeks. So he must have died then.

Later that night as I was contemplating the day’s events, I remembered the name, “Timothy James”.

One of the meanings given for “Timothy” is “Precious One of God”. God was not only telling me that my little miscarried baby was precious to Him, but I knew that God was impressing on me that all these tiny babies are precious to Him, every one of them. Those whose pregnancies are received with much joy and the many who are rejected through first trimester abortions. How His heart must ache for all the millions we have failed to love.