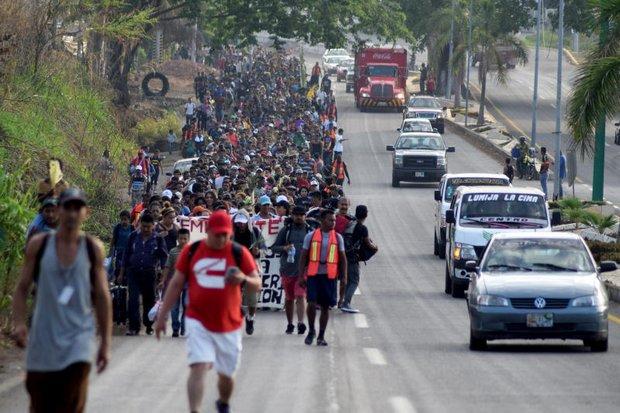 Facts of the Nauru asylum-seeker debate

ABOUT 50 asylum-seekers on Nauru have turned down resettlement in the United States. Why on earth would they do that?

The answer is simple. They want to come to Australia and are encouraged by doctors, advocates and others to turn down anything except Australia. But this report is not about emotion, but one of fact. This is not about having a heart or being heartless, but one that dispels myths.

Australians are compassionate, and there is growing community and political momentum to get children off Nauru. Home Affairs Minister Peter Dutton wants all refugee children removed from Nauru and has been working towards that goal. But before a blowtorch is applied to the politics, here are the facts.

● Asylum-seekers on Nauru – and most of them have been found to be refugees – are not detained. They are considered Nauruan residents and can come and go as they please. They are not locked up after dark. Asylum-seekers such as this father and son are free to roam on Nauru. They are not locked up. ● Asylum-seeker residents on Nauru have a 20-year visa. ● The Coalition Government has spent a lot of money – tens of millions of dollars – to provide quality medical services. They do this because they do not want the asylum-seekers to come to Australia, because once they come here, they launch legal proceedings to stay .

● There are about 650 asylum-seekers on Nauru and 65 health workers – a ratio of about one to 10. In some parts of Queensland, including towns with thousands of people, residents have to travel for hours to see a doctor. The access to medical treatment is better on Nauru than in some parts of Australia. ● There are two mental health team leaders, 15 mental health nurses, three psychologists, two psychiatrists, three counsellors, one mental health manager, and two torture and trauma counsellors. There is one clinical child psychologist, one clinical team leader, one developmental occupational therapist, and one social worker. ● Intelligence agencies warn that if asylum-seekers get to Australia, people-smugglers will be encouraged to send more human cargo back into dangerous seas.

There are about 50 children on Nauru. Home Affairs Minister Peter Dutton wants them all removed from the island, and over the years has reduced their numbers. But, perversely, his success can undo the success of stopping the boats.

This is recent evidence to a Senate Estimates hearing from Home Affairs Secretary Michael Pezzullo. Pezzullo is not some Coalition stooge. He worked for former Labor foreign minister Gareth Evans. He was also deputy chief of staff to then Labor opposition leader Kim Beazley. He has worked as a public servant for Labor and Coalition governments, and he takes seriously the impartiality that is demanded of his high post. He does not play favourites but ensures he knows his brief. It is uncomfortable for people to accept this – and some will refuse to accept it is happening – but here is Pezzullo’s recent evidence, noting it is an offence to mislead. Asked about people on Nauru self-harming, he cited “people ingesting detergent, for instance, in order to cause a sufficient degree of internal symptoms”. “There has also been the swallowing of taped blades and the like. We invest a lot of resources into ensuring we keep them as well as we can. “Upon transference to Australia – and there’s something in the order of over 600 people here on temporary transfers – the law states quite clearly that when their period of treatment is concluded, they’re expected to return. So what about New Zealand?

NZ offered to take some of the people off Nauru.

Pezzullo has warned that sending asylum-seekers to New Zealand without amending the law to prevent them from coming to Australia is a “live risk”.

I have not heard cries yet of "Sexism" or "Misandry".  It seems even Prime Ministers can make discriminatory statements about men. Would she get away with it if she said she didn't want single women?  There are far fewer single women amongst them, that's why.

“So we try to make that clear to people. We don’t want to create a situation where people think medical transference to Australia is a pathway to residency, because that could incentivise these kinds of perverse behaviours.” That means the Government does not want people purposely hurting themselves so they can come to Australia and then launch legal action to stay here. Speak to any Defence Force member about what their lives were like before Operation Sovereign Borders and you’ll understand why so many grapple with life and the costs of their work. They speak of the horrors of pulling dead kids from the ocean, and parts of their bodies too, including the arms and legs of babies and toddlers. This is an emotional debate, but one side has been forgotten, and it is because of the success of Operation Sovereign Borders. 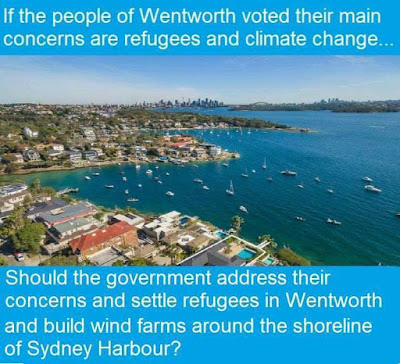 The aforementioned PM Turdball represented the electorate of Wentworth, before he left his post.  That is an upmarket suburb of Sydney. The people there have elected a Green-Socialist Independent in his place. They all support bringing the refugees to Oz. I know exactly where they should be moved to. Turdball was never a Conservative. He tried to get a slot with Labour but they would not have him. But of course such people are always keen to virtue-signal. Come to doing something is another matter. 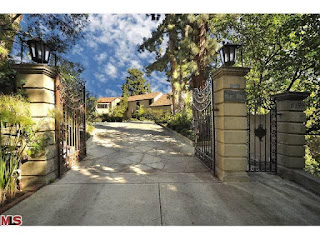 America will have the same problems. Their 'sanctuary' cities are run by such people who are keen to take in refugees just as long as they do not wander through the gated communities of the celebs and nonebs, like say, Katy Perry. But if, say, a wall is seen by the Donald as a better solution than an Island, good luck to him. India and Pakistan could give him some practical ideas. They have had one for decades.

Keeping them out in the first instance is the best idea. But I still think the Don should consider islands. Like Oz did. Have a drink and a think. Pax

Knackered Old Knight and blogger/innkeeper at The Knight & Drummer

An Australian now, he was born and bred an Englishman but has stood on a town-hall stage, raised a hand and said ‘G’Day’. A respect for the social fabric is tempered by a fine sense of judgement and foolhardiness which sees him defying immoral and anti-Christian Laws. He may be found every week outside the Hobart Abortuary saying his Rosary, despite the threats of jail. Fines are no good for one so poor. The police no longer even tell him to ‘move along’ as he moves very slowly anyway.