Two scourges: Coronavirus and abortion. One cure: the Mass. 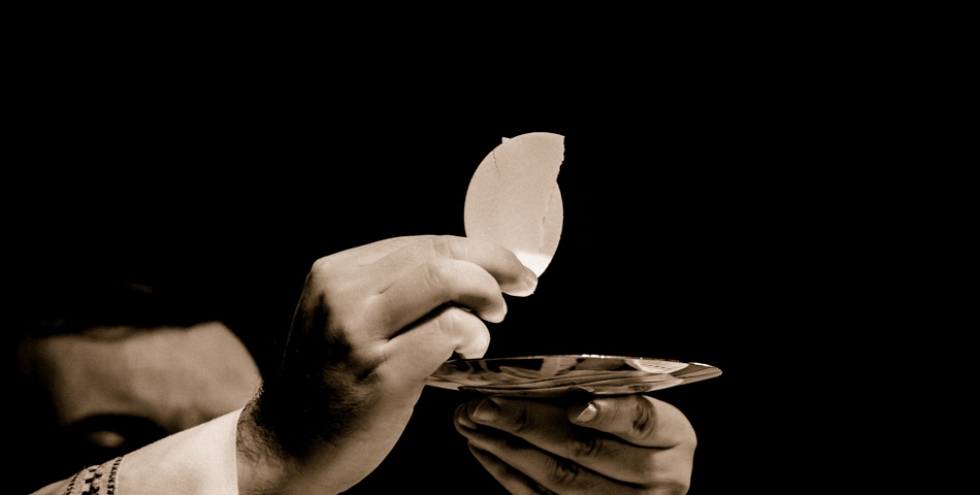 Yesterday I attended Mass at St Anthony's Church of the Society of St Pius X (SSPX) in Whanganui. They celebrated six Masses yesterday: the demand was so great I had to book in.

The best option, said Father Laisney in answer to my phone call, was the 6 p m Mass. Whanganui is more than two hours away but, starved of the Eucharist for so long, I was happy: the 6 p m is even preceded by Rosary and Benediction. I booked in.

Then the phone calls started. One came from a Catholic 'health professional' who in the nicest possible way conveyed to me the message "Julie don't go!" (Rinse the Blood off My Toga).

Someone else said I wouldn't want to be 'a vector'. Four of my five darling children clocked in too. One said God wouldn't mind.

The issue for me was the other way round: I would mind. It's a case, as always, of trying to do what is most pleasing to God.

God commands that we keep the Sabbath Day holy and the way that most pleases him is, of course, the Mass. I could have assisted at Mass at Our Lady of the Southern Star Abbey ('Kopua'), but there they will not give Communion on the tongue as required by the norm and the GIRM.

The Traditional Latin Mass abides by those requirements, preventing thereby the sacrilegous likelihood of fragments of the Host falling to the floor - or worse, being pocketed and used for satanic purposes.

Attendance at St Anthony's SSPX yesterday was limited to 100 at each of the six Masses. We maintained 'physical distance' except when receiving Communion.

We heard a sermon on the Four Last Things. Death, Judgment, Heaven, Hell. Father Michael Johnson told us that in the confessional (doing it the old way) he can recognise about 15 voices (but fortunately for them, not the matching faces - or not so's he'd let on) and he thought the other three St Anthony's priests knew the same number of voices, and four X fifteen was Not Nearly Enough.

He delivered a blistering sermon, quite histrionic actually, describing how the Particular Judgment awaits every one of us.  I'd be surprised if he doesn't hear some new voices in the box before the Easter festival - when I will attend the SSPX TLM again, in Napier at the funeral parlour. Napier is only one hour away!

We need to come to grips with the fact that these days, in Jacindarella's version of Wonderland, where coronaphobia has the Bishops but not the 'Health' Department in its grip, you can't go to Mass, but you can get an abortion. For the bishops, Mass is not an essential service, but for the 'Health' Department, abortion is.

Two days after Ardern presided over the enactment of one of the world's most disastrous abortion laws, the Bishops banned the Mass. It's INSANE.

My fifth child (actually the first-born, and a Latin Mass adherent) said to me: "After passing the worst abortion law in the world, New Zealand's coronavirus experience will be the worst in the world."

Before you go, tut tut, look at New York, which modelled NZ's dreadful law. On March 14 the Archdiocese of NY banned the Mass. New York is now the epicentre of coronavirus in the US. New York City has one third of all the coronavirus cases in the US.

In Poland, the Mass has not been banned. 7 have died. You get the picture? If Catholics in Poland hadn't been numbed by 50 years of the NO, they might be showing up to the Masses priests are celebrating in empty churches. They might not have even 7 dead.

Think about it. Think about what Dr. William J. Walsh, Archbishop of Dublin says of the Mass:

"If all the prayers of loving hearts from the beginning of the world, and all the seraphic worship of the thrones and principalities of heaven, and the burning devotion and love of the Virgin Mother of God, and the million voices of the universe of all creatures of heaven and earth and sea were offered up in one universal and harmonious act of praise and adoration, they would not equal or even approach in value and efficacy the infinite worth of a SINGLE MASS."

"Are we forgetting, too, that Mass is offered in the presence of the holy angels and in communion with the saints of the Church triumphant so often honored in the liturgy and especially in the Eucharistic Prayer?

"Even a priest “alone” in a chapel is never alone; he is always in the company of God’s elect, “wrestling not against flesh and blood, but against principalities and powers, against the rulers of the world of this darkness, against the spirits of wickedness” (cf. Eph. 6:12).

"Of course, this cosmic perspective — which is that of Sacrosanctum Concilium no less than of Catholic tradition as a whole — depends on a living faith in what cannot be seen by the human eye.

"The Eucharist is the principal and central raison d’être of the sacrament of priesthood, which effectively came into being at the moment of the institution of the Eucharist.

"We can understand, then, how important it is for the spiritual life of the priest, as well as for the good of the Church and the world, that priests follow the Council’s recommendation to celebrate the Eucharist daily: “for even if the faithful are unable to be present, it is an act of Christ and the Church” (Vatican II, Presbyterorum Ordinis, 13). In this way priests will be able to counteract the daily tensions which lead to a lack of focus and they will find in the Eucharistic sacrifice — the true center of their lives and ministry — the spiritual strength needed to deal with their different pastoral responsibilities. Their daily activity will thus become truly Eucharistic."

The prayer of our Eternal High Priest is the holiest and most powerful of all prayers, and the Mass is His salvific prayer, His sweet-smelling oblation, offered at the hands of the ordained minister for the welfare of the living and the dead, and for the priest’s own sanctification. If the priest is not holy — if he does not assiduously pursue conformity with Christ the High Priest — his ministry will be increasingly empty, shallow, fruitless. That is of no benefit to the People of God.

"In times of danger and difficulty, the faithful and their ministers stand in even greater need of the grace of God, supporting and strengthening them. To deprive the Church of so great a good as a single Holy Mass, or to encourage priests to deprive themselves of it on any day, would reflect not so much an enlightened attitude as a weak faith, a turning away from the supernatural, a tepid charity, a placing of hope in this world and its “solutions.” Whatever their merits, worldly solutions are not ultimate ones, and they cannot bring us the divine help we need."

As you can imagine, after all the solicitous phone calls on Saturday I reflected on my decision to go to Mass on Sunday. Then on Sunday morning I read, in Divine Intimacy (Fr Gabriel of St Mary Magdalen, OCD):

"Today there is a pause of holy joy and spiritual comfort which the Church, like a good mother, gives us in the middle of Lenten austerity so that we may renew our strength.

"Jesus is the Bread of life, always at our disposal to appease our hunger.

"There is no difficulty in our lives for which God does not know the solution. From all eternity He has foreseen it and has the remedy for each case, no matter how complicated the situation may be.

"Deign to help me today. Poor am I, but I come (in Communion) to you who are rich; in my wretchedness I present myself to You, the All-merciful. Ah! grant that I may not leave You, empty and deceived. I come to You hungry; do not let me go away fasting. Weak, I approach You; do not turn me away unstrengthened! Grant me the grace to be nourished."

I made my decision to go to Mass, in Whanganui - a city which, St John Vianney (Cure of Ars) prophesied to Mother Mary Aubert - "will never lose the faith".

I have to apologise to the NZ Bishops: they followed up their statement cancelling Masses with no reference to Christ with another, 'pastoral' letter recommending Psalm 23, as a "call to God with deepened awareness of our need and with confident hope".