If Peter Ridd Loses, Academic Freedom in Australia is Dead 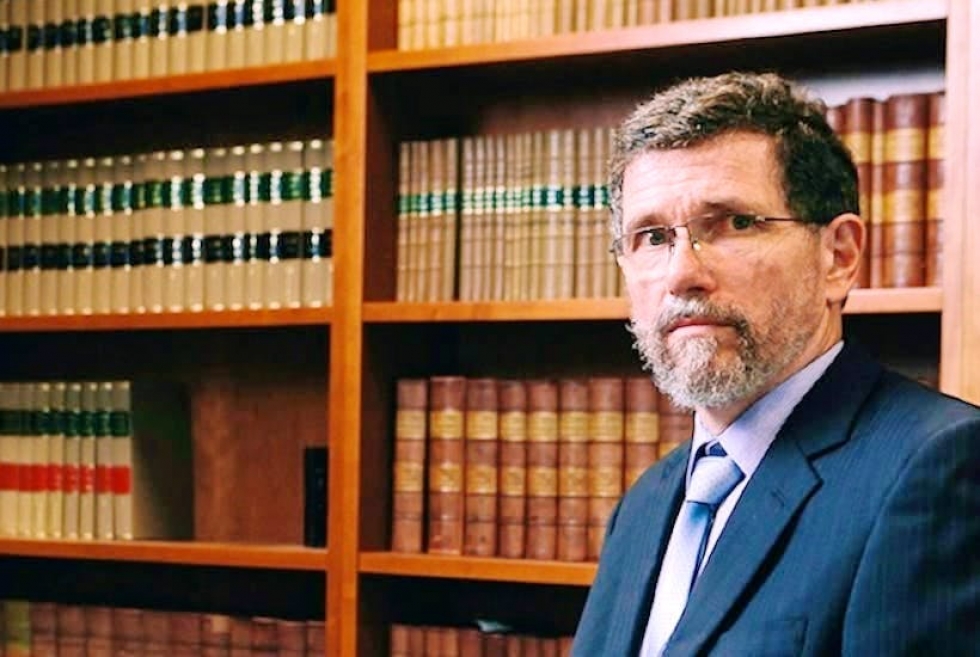 Peter Ridd was a respected Australian academic who dared to question "the science" of climate change, and in particular, the work of colleagues at his then university.  He was sacked for his trouble.  He is now heading for the High Court, and all of us should be hoping he wins his case.  There is much at stake - for freedom.

Scott Morrison once stated that he was unconcerned about ongoing attacks on free speech, because he thought that free speech “does not create a single job”.  Well, Prime Minister, it is now patently clear that people can lose their job for the “crime” of daring to express an opinion that challenges the dogmatic assumptions of the country’s academic elite.

On May 2, 2018, Professor Peter Ridd was sacked by James Cook University. The first alleged misconduct started when he called-out one of his colleagues for falsely claiming healthy inshore coral reefs were dead from climate change and deteriorating water quality. Ignoring this first instance of administrative censure, he went on television in August 2017 to explain why so much of what is said about the Great Barrier Reef, including by scientists at the Australian Institute of Marine Science (“AIMS”), is untrustworthy.

Never mind the truth. The problem is that someone may dare to speak the truth about these matters in a post-modern world. It is not the Great Barrier Reef that is dead. It appears very much alive. What seems really dead in this country is actually academic freedom.

Despite his stellar career and undeniable contribution to the scientific debate, Ridd has, therefore, become a pariah for daring to question a rigidly enforced orthodoxy. In doing so, he upset some inflated egos and delicate feelings of academics who rely on taxpayer funds to propagate their political agenda and/or pursue a non-existing problem.

The first decision, handed down by Judge Salvatore Vasta back in April last year, found in favour of Ridd’s defence of academic freedom. Judge Vasta then ordered that the 17 findings made by the University, including two speech directions, five confidentiality directions, and the final censure given to him, were all unlawful. This was a significant victory for academic freedom and the right to ignore administrative measures that prevent academics from expressing their findings on areas of their scientific knowledge.

James Cook University did not accept that decision by the Federal Circuit Court. Instead, using our taxpayer dollars it appealed that decision from the Federal Court. On 22 July 2020, the university’s appeal was upheld on the basis that Ridd had been “un-collegial” in stating that JCU and the AIMS are “untrustworthy” because of “systematic deficiencies in their quality assurance processes”. In the judgement, the majority of the appeal court went further and even portrayed academic freedom as being only Ridd’s “personal opinion”.

In other words, there was no attempt on the part of these appeal judges to define these terms, which is precisely what we expect a decent court to do. No less important, the decision ought to be reviewed because it ignored the determination of the federal law (and its concomitant regulations) that universities must have a special regard for matters of academic freedom and free intellectual inquiry.

Because Australian universities are established by legislation, built on public property, and funded by government grants and state-subsidised loans, they are legally obliged to protect freedom of speech and free intellectual inquiry. They are legislatively bound to meet a range of criteria in exchange for federal funding, and are responsible to the federal regulation – Tertiary Education Quality Standards Agency (TEQSA) – which enforces the relevant legislation, the Higher Education Support Act 2003, and the Higher Education Standards (HES) Framework 2015.

For example, the Commonwealth’s High Education Support Act requires every university that receives government funding to “have a policy that upholds free intellectual inquiry in relation to learning, teaching and research”.

Finally, the university primary regulation, TEQSA, in its 2017 ‘Diversity and Equity’ guidance note, declared: “Measures taken to accommodate diversity should not contravene the pursuit of intellectual inquiry, and more generally, freedom of expression”.

Unfortunately, none of these requirements are properly applied.  The ‘Free Speech on Campus Audit’ concluded that only eight (19 per cent) of Australia’s 42 universities have a policy complying with the legal obligation to pursuit intellectual inquiry, as mandated by the Higher Education Support Act.

According to this systematic analysis of Australia’s 42 universities, 81 per cent of them effectively stifle academic inquiry and intellectual debate by creating policies that encourage students and academics to avoid expressing “controversial” ideas.  As noted by then IPA research fellow Matthew Lesh:

This failure to protect free speech is seriously imperilling the discovery of truth, the core purpose of Australia’s universities; student development, which requires debate and challenge; and the future of Australian society, which depends on a tolerance and openness to debate.

In reviewing the instances in which universities have sought to specify what “intellectual freedom” and “academic freedom” entail, it is disturbing to note the majority of the Federal Court stated, without further elaboration and rather dismissively, that “there is no common understanding” about these principles, “nor any such freedoms should be set”.

This statement contradicts the best principles of legal hermeneutics, which says that providing for such definitions is precisely what one ought to expect the courts to do. However, as Henry Ergas commented in his excellent column last week, “providing any sort of definition is precisely what the majority declined to do. Shorn of analytical guardrails it, therefore, lacked a rational basis for judging whether Ridd’s conduct was an exercise of “intellectual freedom”, instead seemingly to rely on what one might describe as “the vibe of the thing”.”

Above all, it is disturbingly apparent that the JCU has decided to punish Ridd precisely for daring to speak an inconvenient truth, which undoubtedly upset a few powerful elements within the academic establishment. This can be revealed, among other things, in the charge of “bringing the university into disrepute”, somewhat an ironic statement in light of the outcome of further stifling academic freedom. The irony, therefore, is that it is precisely the actions of that university, in relentlessly pursuing Professor Ridd, which has effectively brought that institution into disrepute.

Of course, Ridd is not the first victim of that university. Others include the outstanding historian Mervyn Bendle and the internationally acclaimed geologist Bob Carter. Both of these respected academics have also been removed from that university for daring to make eminently sensible comments in their respective areas of academic expertise, including Professor Carter’s compelling scientific evidence which unfortunately for him did not entirely fit with the preferred narrative of the university.

Once the hotbed of free inquiry and challenging thinking, Australia’s universities have become bastions of left-wing indoctrination and enforced compliance. As law professor James Allan points out, these universities have become illiberal environments where a handful of bureaucrats and union officials now impose their own restrictions on what should normally be ‘the full-blooded, vigorous, satirical exchange of (academic) ideas’.

But if these universities cannot and will not be bastions of free speech and free intellectual inquiry, how indeed can they be places of higher learning and scientific discovery?

According to Greg Craven, the Vice-Chancellor of the Australian Catholic University, the problem is that those outside the narrow academic circles ‘increasingly suspect universities are more interested in their public image, and not upsetting their Departments of Woke, then protecting fundamental academic freedom’. After reminding us that at the heart of academic freedom is ‘the right to take a view with which your colleagues disagree’, Professor Craven then goes on to authoritatively inform (he is a Vice-Chancellor after all) that particularly in the fields of law, history and political or environmental science, ‘it can be very dangerous to be a dissenter’ and work in an Australian university.

Should the appeal proceed to the High Court, one would expect that the Morrison government not only has a moral but also the legal obligation to intervene firmly and effectively on intellectual freedom’s behalf. Unfortunately, you should not hold your breath, because, as mentioned above, the Prime Minister once shrugged off any concerns about free speech as being of little importance for him. At every opportunity, his so-called “Liberal” government has most illiberally squibbed any of its commitment to freedom of speech. As The Spectator Australia has correctly editorialised:

The war on free speech has been prosecuted mercilessly (and successfully) by the Left for many years, despite Labor rarely being in government. The Coalition has, as they say, never missed an opportunity to miss an opportunity to fight back.

With the majority of the Federal Court effectively neglecting to uphold the legal requirement of protecting ‘free intellectual inquiry’, it is now the High Court’s responsibility to uphold, on a solid foundation, this vital element of every truly free and democratic society. As also noted by The Spectator Australia, if a nation ceases to uphold the principle of academic freedom as a fundamental cornerstone of its intellectual and cultural life, ‘then it assigns itself and its citizenry to permanent vassals status, where the mandarins of the state dictate what is acceptable learning and what are permissible opinions’.

I wholeheartedly agree. This is why the decision on whether or not give leave to Professor Ridd is so important. As for myself, I expect the High Court to do the right thing by upholding the statutory requirements requiring Australian universities to uphold free intellectual inquiry in relation to learning, teaching and research. As a constitutional law academic, I can confidently testify that the final outcome this special leave constitutes one of the most critical decisions in our nation’s history. The future of Australia depends on this.