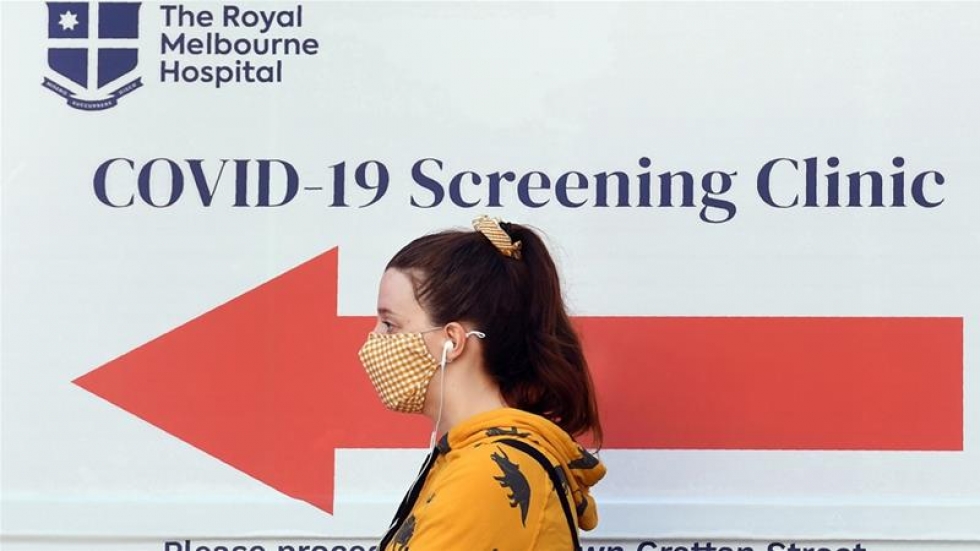 Victoria is now a living hell of Covid Fascism, as the vicious lockdown continues.  Yet the people of Victoria seem to think this is all a good thing, or at least a necessary evil.  This is what life in Victoria is like now.

Melbourne, Australia is enduring an iron-fisted lockdown, due to the government’s decision to move from management to elimination of the coronavirus and due also to its spectacular mishandling of active cases.

Stage 3 restrictions came back into force only weeks after the state had slowly begun to reawaken from an initial coronavirus lockdown, which was undertaken despite there being very few cases in the community at that time.

Stage 3 quickly gave way to Stage 4 as deaths in aged-care facilities began to rise dramatically. The draconian measures were justified by an exponential increase in positive cases, revealed by massive new rates of testing. The simple logic of increased testing leading to increased numbers is lost on the media and sadly, on many residents, who seem fully committed to exaggerating the risk posed by the virus.

“Staying apart to stay together”

Melbourne is home to five million residents, which means that 20% of the nation’s population is now under virtual house arrest: all five million are under a curfew from 8pm to 5am, and police may enter anyone’s home at any time without a warrant. It is now unlawful to travel more than 5km from one’s home without an exemption. Schools and daycare facilities are closed except for children of essential workers and retailers other than grocery stores have shut their doors. Those unable to work from home must carry a permit signed by their employer. Masks are now mandatory, despite the State Premier, Daniel Andrews, claiming only weeks ago that they were ineffective and unnecessary.

Andrews and his police department heads give regular updates on the expansion of the state’s oppressive law enforcement. Like a scene from some dystopian movie about a shadowy government trying to crack down on a popular Resistance, their reports are sprinkled with references to various despotic ‘white ops’ being enforced for the Greater Good.

There’s Operation Sentinel, which is comprised of 750 police officers operating vehicle checkpoints around the city’s boundaries. Residents who refuse to give their details and reasons for travel can expect to have their car windows smashed in by the police then to be pulled out and interrogated[1].

Operation Vestige employs defence force and health department personnel to perform spot checks on those who are meant to be self-isolating at home. Absconding from self-isolation could mean a fine of up to $5000.

Then there is Operation Shielding in which protective service officers, redeployed from public transport security, now monitor shopping centres for social distancing/mask non-compliance. Those who have exemptions from wearing a mask need to be quick to alert police of the fact, lest they end up like the unfortunate - and admittedly aggressive- woman whose arrest is doing the rounds[2] on social media. Lastly, domestic violence situations are covered by Operation Ribbon, which is working overtime in response to the increase in abuse since the diktat began.[3]

Only one member of each household is allowed to buy groceries once a day. Buying limits are in force in most supermarkets, which means that larger families are limited to the same amount of meat and other necessities as smaller ones. Bulk supermarkets like Costco are now out of bounds for those who live more than 5 km away. Premier Andrews has announced that meat shortages are to be expected as distancing requirements being implemented at processing plants will lead to a one-third reduction in meat production; something that will affect the whole nation.

Although there may be a good deal that is unknown about the coronavirus, it was established early on that the elderly are one of the groups who are most vulnerable to contracting a serious case. However, the elderly are being treated shamefully by Victoria’s Department of Health and Human Services, which is one factor behind the large number of deaths in this demographic. COVID positive patients are being denied access to hospitals, with ambulances being refused entry to aged-care facilities. As aged-care facilities are not set-up for isolating patients, the virus quickly spreads throughout a home, infecting staff as well as residents. One 76-bed facility now has more than fifteen patients and five staff testing positive for COVID-19.

Instead of providing life-saving hospital care for these elderly COVID patients, residents are being heavily sedated with drugs that may exacerbate the symptoms of COVID and even accelerate death. Such drugs are regarded as end-of-life medication and are usually provided in palliative care settings. There are reports that even asymptomatic patients are being sedated, some without regard to the opinions of their doctors and families.

According to a report in The Australian[4], the DHHS has stated that hospitals do not have beds for “those type of people.” This begs the question of exactly who are those people who have a greater need for hospital care than those most likely to die from the virus?

An initial spike in cases occurred two weeks after a Black Lives Matter protest which saw around ten thousand activists take to the streets of Melbourne. At the time, the Premier advised the public against attending, but he also announced that no arrests would take place at the protest, removing any deterrent against the protest. [By contrast, an anti-vax/anti mask protest was immediately quashed a few days ago with several arrests taking place.]

But perhaps the most egregious violations occurred in the hotels selected by the government for quarantining travellers who were returning from overseas. There are suggestions in some quarters that every new case of COVID can be traced to one of these quarantine hotels.

Breaches include guests being allowed out of their rooms regularly to smoke and walk around and also to fraternise - even intimately - with security guards. The guards were not trained and knew little of quarantine protocols. There are reports of them not being given adequate personal protective gear. The quarantine violations were deemed to have been so serious and so systemic that a special inquiry was set up to examine the hotel system.

Premier Andrews has declined to answer questions from the media, despite there being no legal barrier to him doing so. New South Wales politician, Mark Latham, claims[5] that the real reason Andrews wants to maintain his silence on the debacle is that the security firm chosen to oversee the quarantine was hired under a ‘Social Inclusion Procurement’ policy. That is, workers were hired only because they were indigenous. Latham stated that “Identity politics has claimed its biggest victim: all of Victoria, indeed the entire country, given the damage to the national economy.”

Perhaps the best indicator of the Andrew’s government’s priorities is the list of businesses and services that have been allowed to remain open. Heroin injecting rooms are allowed to remain open, even after curfew and abortion providers are still open for business; a major hardware store provides ‘click and collect’ services due to its self-proclaimed ‘necessity’ for ensuring customers’ mental health. But for ‘Catholic’ Daniel Andrews, Churches remain shuttered with barely a boo from the Archdiocese.

Church services have been deemed ‘non-essential’ during all phases of the lockdowns, with the bishops and many priests apparently in full agreement with this assessment. Catholics who had only just been able to return to Mass in relative freedom have found themselves denied the Holy Eucharist yet again.

In answer to a brother bishop’s tweet about the strict curfew coming into force, the Archbishop of Melbourne glibly replied, “Luckily, I tend not to go out partying late at night these days.”[6] That comment was made only hours after Catholics had been told they were under house arrest beginning that very night.

Perhaps the hierarchy have not yet cottoned onto the reality that social media is a public forum, and that every flippant remark is visible to hundreds, if not thousands of readers who may be expecting something more substantial from their shepherds.

Social media musings aside, the Archbishop has remained fairly quiet since the pandemic was first announced. The official Archdiocese website outlines the Church’s regulations for parish worship[7] which was produced in compliance with the latest government recommendations.

Thankfully, priests are told that they must give Viaticum to the dying. They are also encouraged to say private daily Masses and to hear confessions. However, Baptisms are to be deferred except in the case of “grave necessity.” Weddings are banned unless an exemption can be gained from the government on compassionate grounds, in which case only five may attend, including the priest. Funerals are allowed a maximum of ten mourners; live streams Masses a maximum of five.

For those able to access Mass, communion on the tongue is discouraged but not banned altogether. There are mandated protocols for mask-wearing and hand-washing, distancing and reading, but very little in the way of sympathy or encouragement for the faithful.

Back in the days when Victoria was a democracy, conservatives would ask with surprise how Daniel Andrews and his cabal of Socialists could have gained power. The optimistic among them had been hoping that Andrews’ latest debacles - following on his from his proven corrupt election tactics, his signing of a secret deal with the Chinese, his promotion of sexualised school curricula and his bringing euthanasia and abortion to the state - might finally be enough to see his reign ended at the next state election.

But the polls are saying otherwise. This current poll from the Herald Sun, and with a sampling of more than 180,000 people, suggests that Andrews and his hard lockdown are more popular than ever.

In his excellent piece on Victoria’s latest restrictions, Professor Augusto Zimmerman quotes former Australian Prime Minister, Sir Robert Menzies, as saying: “When we have the all-powerful state, the people will then be the servants of that state and the minds of those people will be servile minds, because there will only be only one master – the state, inhuman but all-powerful!”[8]

So while some Victorians try to grapple with the scope of their government’s ineptitude, most are willing - even insistent - on surrendering their freedoms and allowing state intrusion into every aspect of their lives, in order to feel safe from a virus that is little different from a plethora of other illnesses and dangers that human beings have to face every day of their lives. This tiny virus has succeeded where secularism and cultural Marxism have failed: producing empty Churches, desperate families and a cowering populace who has surrendered to an inhuman State.