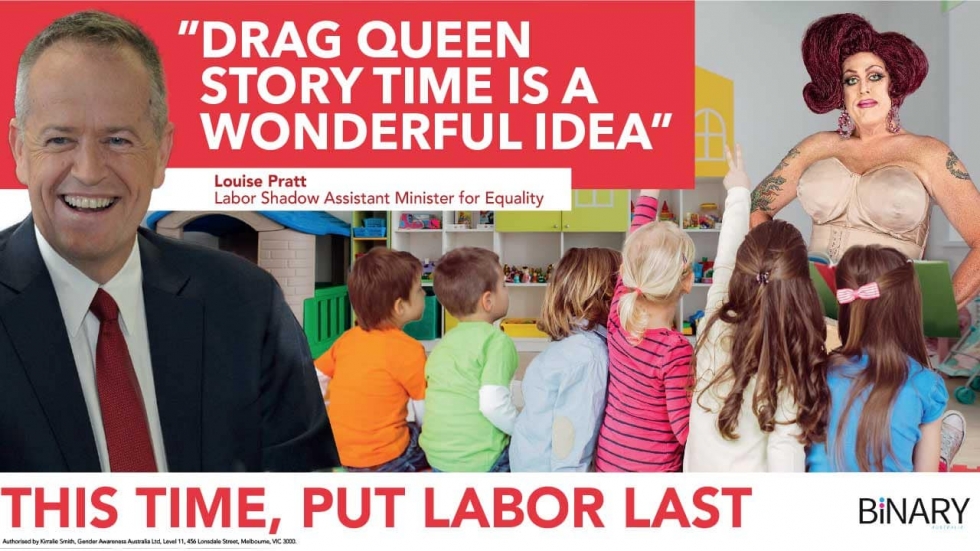 This website has written many times on the prevalence of highly sexualised school curricula and the push from progressives to indoctrinate every child with its soul-destroying ideology. We have also tried to expose the many threats to free speech being experienced in this country.

With the Federal Election drawing ever nearer, advocates for the family are trying to expose this agenda, but are meeting with resistence from all quarters.

The pro-traditional family organisation, Binary, was prohibited from showing a billboard which sought to draw attention to one related form of this indoctrination: the Drag-Queen story time sessions which presently run in the US and in the UK. In these sessions, usually held in libraries and schools, a camped-up male reads to small children, in order to become a self-professed 'queer role model.'

The Outdoor Media Association banned the sign, claiming it went against their code of ethics, since the image could potentially 'vilify' members of the public on the basis of their sexuality.

Binary's billboard challenged ALP leader, Bill Shorten, to admit whether or not his party would be funding these sessions in Australia - something, incidentally, which he has never denied. The isue was raised in 2018 when Labor Senator, Louise Pratt, gave her support for the events, after a session was held in a Perth bookstore. Pratt's endorsment of the program, "Drag queen story time is a wonderful idea" is featured on the sign.

Binary spokesman, Kirralie Smith, asked, "If we can’t talk about a major party’s position on an important issue like this during an election campaign, then we have to ask, what has come of free speech in Australia?

Former Speaker of the House, Bronwyn Bishop, was outraged by the idea of cross-dressers being given influence over young children. Bishop stated,

"This is about telling children that their gender is fluid, that they can choose to be male or female, and I don’t think its proper that young children should be told that. I certainly don’t think it should be taxpayers money paying for it to be done. It comes out of queer theory, which is based on Marxist theory, and it’s again based on breaking down the family which they see as necessary to get rid of capitalism.”

If parents are in any doubt as to the harmful nature of the progressive's sexual agenda for children, then it would pay to spend some time watching an informative video included in this article on the website, "You're Teaching out Children What?". The article includes some of Labor's extreme sexual agenda policies from its 2018 Policy document, including the promise to establish a new Commissioner for Sexual Orientation, Gender Identity and Intersex Status issues (Item 90) , expanding gender options on passports (Item 88) and banning reparative therapy for people experiencing same-sex attraction. (Item 92). Labor has also committed to make 'every area of policy (is) inclusive of the needs and interests of all Australians-including lesbians and gay men, and bisexual, transgender and intersex people-without discrimination.' (Item 89: emphasis added.) Click here to read the article and watch the video.

The entire ALP National Platform Constitution can be accessed here. It contains multiple references to homophobia, transphobia, support for the LGBTI community, as well as Labor's now infamous 'women's health'strategy - the ALP's promise of free abortions in every public hospital.

Although the ALP is a prominent supporter of this radical gender ideology, it is not the only party which is promoting it. The 'Rainbow Votes' website has released a scorecard showing the policies of various parties surrounding LGBTI issues. You can access the scorecard and see which parties to avoid here. And while our 'conservative' leaders might be more hesitant to mandate gender propaganda, they aren't always fans of free speech. The Liberals' support for exclusion zones and their rush to censor online activity in the wake of the Christchurch massacres is a sign that Progressive ideas are firmly entrenched in their ranks.