Memo to Victoria Police: Just Do Your Day Job 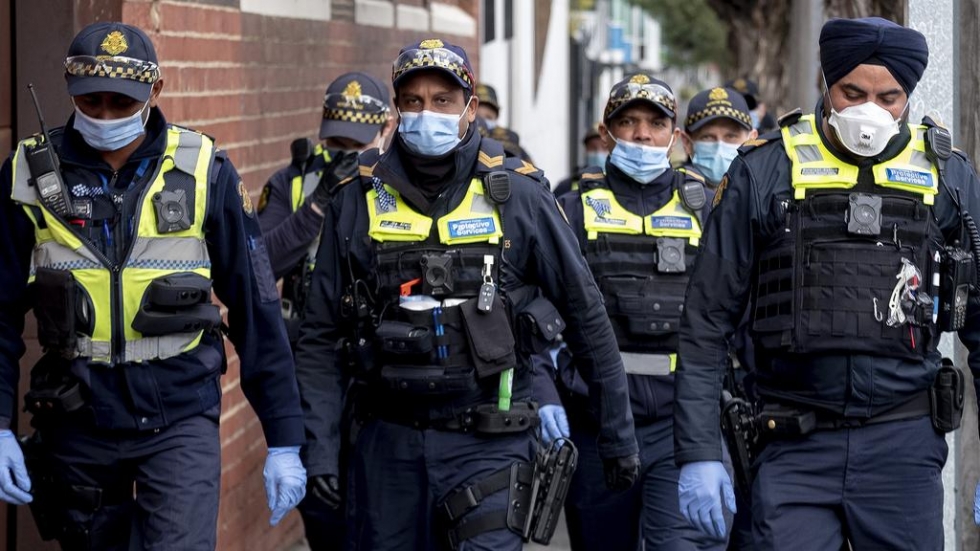 Instead of insulting citizens who wish to protest their government's totalitarian lockdown, senior civil servants in Daniel Andrews' Victoria should just get on with doing their day jobs.

Instead of insulting citizens who wish to protest their government's totalitarian lockdown, senior civil servants in Daniel Andrews' Victoria should just get on with doing their day jobs.

The Westminster system that assigned the politics to elected and accountable politicians and the administration to never-seen-never-heard bureaucrats is long since dead in the Anglosphere.  But occasionally we need reminding why its loss is so important.

Step aside Lord Armstrong (in the UK) and Sir John Bunting (in Australia).  Now we have Professor Pantsdown (aka Neil Ferguson, the Mad Cow man, weirdly resurrected in 2020 along with his discredited modelling).

Two types of civil servant fascism have emerged during the Covid panicdemic, gutting the formerly much cherished notion of the politically neutral bureaucrat offering objective, sound, fearless advice to elected ministers.  This was central to the much imitated British system of government and provided the best form of policy-making.  Notwithstanding the caricature of the faceless, scheming, self-serving, all-powerful public servant depicted in Yes Minister.  There is a bit of that, as pointed out by the public choice theorists, but not too much.  And it worked.  We got better policy, better government decision-making.

All that went out the door some time back, with short term contracts for civil servants, politicised KPIs and inflated salaries.  Another story.

The first kind of civil service fascism is the chief-medical-officer-driven public health policy that has characterised the Covid affair.  This is policy-making by in-group public sector “experts”, not elected politicians.  Fauci-esque, they strut the stage as stars at the endless press conferences, claiming a platform that far exceeds their expertise and giving cover, in effect, to spineless politicians.  They drive discussions and decision-making in backroom strategy sessions.  Some of them apparently even have sex appeal – the so-called “chotties”.

The second form of Covid civil service fascism is the cowboy copper enforcement of the aptly termed “police state”.  Nowhere is this on greater show than in Victoria, Covid central, run by an escaped lunatic called Daniel Andrews.  He is now mostly known as Kim Jong Dan.  (I term Victoria MelDanistan.  It has the police force to match).  And now senior Victorian police officers are in the business of citizen shaming – for planning a protest against their government’s Covid totalitarianism.

Victoria’s police force – affectionately known to many of us as Ashton’s Circus after its now mercifully retired, former chief Graham Ashton – is fresh from two massive humiliations.  One relates to its evisceration by the High Court of Australia over its corrupt ways in relation to “Lawyer X”, a copper-shagging police informant who was, for many years, also a criminal lawyer defending some of the state’s worst drug lords and other assorted crooks and thugs like the late Carl Williams.  There is a Royal Commission now looking into that matter, and hopefully the cops will have the book hurled at them when Commissioner Margaret McMurdo reports in November 2020.  The other is the utter humiliation when the same High Court in April this year roundly dismissed the decade long campaign by VicPol and its allies to get Cardinal George Pell for crimes he never committed.

VicPol has form as a bunch of uncivil servants.  This would, indeed, be a kind description in view of VicPol’s record of chronic under-achievement.  VicPol’s recent record could adjectively be summarised thus:

For a fuller appraisal of VicPol, see:

Ruling Victoria from their brand spanking new 39 storey office tower gifted by Daniel Andrews in return for favours rendered, and being run with the help of Daniel Andrews’ own former chief of staff, appointed as VicPol’s chief of staff and an Assistant Commissioner in 2015.  A cosy relationship, indeed.

Back to civil service citizen shaming.  The classic tactics of the bully are to isolate the target, paint him into a corner, make him the problem, and then go for it.  Of course, civil servants in Victoria are only imitating their political masters in their citizen-baiting.  Bungler-in-chief Premier Kim Jong Dan has been blaming Victorians for their Covid predicament for months now.  What the egregious police Assistant Commissioner quoted above was doing this week was painting those who would protest against lockdowns as somehow the problem, and weird/extremist to boot.  These people should be bullied.  They are putting others at risk by arranging protests.  In ways that somehow the lefties who organised the recent Black Lives Matter protests didn’t, apparently.  VicPol was merely “concerned” about that protest.  No insulting the organisers or participants.  But we already know that VicPol is up to its malodorous armpits in politics.

Link everyday freedom-lovers to more extremist types who overtly see conspiracies in everything.  Turn Covid scepticism into a form of madness, or evil.  As if it isn’t bad enough that citizens (aka curtain twitchers, bedwetters, Karens) have turned against their fellows who disagree with them over Covid, now our senior civil servants are doing so as well.

This is sinister stuff.

Last time I looked, it wasn’t the job of civil servants to describe the taxpayers who pay their salaries as “batshit crazy”.  Especially when your own organisation’s record is a dismal as that of VicPol, a weird cross between Clouseau’s cops and the East German stasi.

Such is life now in modern democracies, where so-called experts and bullies run the elected government.  We deserve much, much better.  As I often say, if I were planning a police state, I wouldn’t be getting VicPol to run it.

Oh, and as for coppers in Victoria doing what they are paid to do – solving crime – the picture is rather bleak.  2018 figures show the following fail-to-clear-up rates against common crimes – aggravated burglaries 64%; property theft and fraud 72%; car thefts 76%; graffiti 81%; non aggravated burglaries 88%; and bicycle theft 93%.

Oops.  Best stick to the day job folks, and stop lecturing and hectoring us over our basic human rights and freedoms.  Like freedom of thought and freedom of association.  If I want advice on personal freedom, the efficacy of this or that vaccine, the right of governments to compulsorily medicate its citizens, and the philosophical justifications of putting people under house arrest, I won’t ask an attention seeking cop with a buzz cut and an outsized ego.