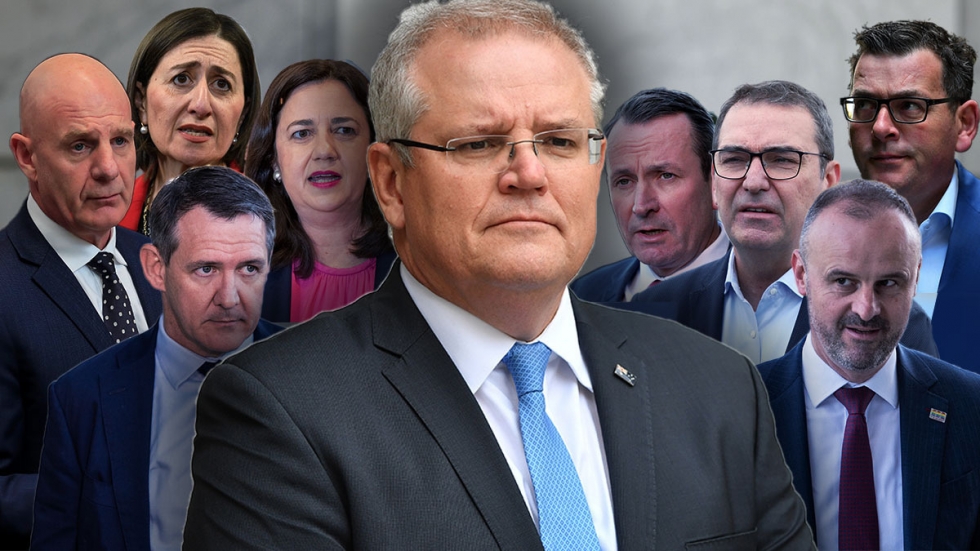 As well as being profoundly irrational and damaging to our freedom and to our economy, elements of the Australian lockdowns may well be unlawful.  A number of legal experts question the constitutionality of things like the prevention of Australian overseas from returing home.

Established by the Morrison government, the pompously self-entitled “National Cabinet” has relied on a discredited modelling based on the misleading assumptions of the Imperial College model, which are notoriously prone to significant exaggeration.[1] Be as it may, such an unconstitutional cabinet, as properly noted by Professor David Flint, ‘has unlawfully suspended and destroyed jobs, small business and much of the economic life of the nation, as well as limiting the people’s freedom with something approaching house arrest’.[2]

The Prime Minister is currently using such a “National Cabinet” to ban Australians from leaving their country. Scott Morrison oversees a regime that has enforced prohibitions matched only by some of the world’s worst totalitarian regimes, particularly Cuba and North Korea.[3]  As a result, Australians currently need a special certificate even to attend a funeral or seeing a relative who is dying overseas. Now, 57,000 Australians have so far been allowed to leave the country, but 16,000 have not and numerous others did not even try because they know their applications would be rejected.

This goes without saying that Australians who are staying overseas and desire to return home are not being allowed to do so.[4] There is presently a limit on how many citizens can return to Australia. According to the Department of Foreign Affairs and Trade (‘DFAT’), there are about 20,000 Australians trying to return home. They are trapped overseas and some are effectively running out of money. They are facing a desperate situation overseas.[5]

‘Essentially you have a humanitarian disaster all around the world that Australian citizens are stranded in terrible conditions’, argues Dr Joseph Forgas AM, a renowned social psychologist and one of those prevented from returning to the country. Professor Forgas first obtained a special permission from the foreign affairs department to attend his mother’s funeral in Hungary. But he is now facing the serious problem of being prevented from returning home.

Currently Scientia Professor at the University of New South Wales, Professor Forgas was born in Hungary and migrated to Australia at the age of 22 as a political refugee from communism. He is now facing a similar position in which one of his most fundamental rights as a citizen has been grossly violated: the right to return home and be reunited to his wife and children.[6] ‘My human rights are being violated. I am deeply disappointed and I believe the Australian government has caused an immense damage to the country’s reputation’, Professor Forgas says.

Morrison contends that his “National Cabinet” has agreed “on the balance of risk” that the number of Australians allowed to return from overseas at present is 4,000 a week. He argues that this must be so because the States may have more people that they can place on quarantine hotels. The Prime Minister does not want to take responsibility and, as a result, Australians overseas are having to suffer enormously.

Of course, quarantine should be only for the sick and never for the healthy. And yet, all travellers arriving in the country, including Australian citizens, must quarantine for 14 days at a designated facility, such as a hotel in their port of arrival. Australians may be also forced by the federal government to pay for all the costs of their quarantine.[7]

There has never been a crisis to justify the use of such extreme measures.[8]  Relying on a few experts, politicians are using extraordinary powers to violate fundamental rights and to destroy jobs and much of the productive sector, while leaving the public sector intact.[9] These privileged individuals have chosen a course of action that are destructive of the rule of law, although there were far more reasonable alternatives.[10]

These actions of the so called ‘National Cabinet’ are profoundly unconstitutional. These are not powers intended to be exercised in its present form. Since a truly democratic government is always bound to exercise its power according to the preservation of fundamental legal rights and freedoms, such measures effectively violate both the letter and spirit of the Australian Constitution. The Australian people have a lawful right demand the immediate lifting of these measures and the full restoration of their fundamental freedoms.

[2] David Flint, ‘Professor Lockdown and the Hypocrisy of the Elites’, The Spectator Australia, 16 May 2020, <https://www.spectator.com.au/2020/05/professor-lockdown-and-the-hypocrisy-of-the-elites/>

[3] Paul Collits, ‘When We Needed Churchill – We Got ScoMo’, Freedoms Project, 16 September 2020. <https://www.thefreedomsproject.com/item/567-when-we-needed-churchill-we-got-scomo>