The Gays Are Not For Turning 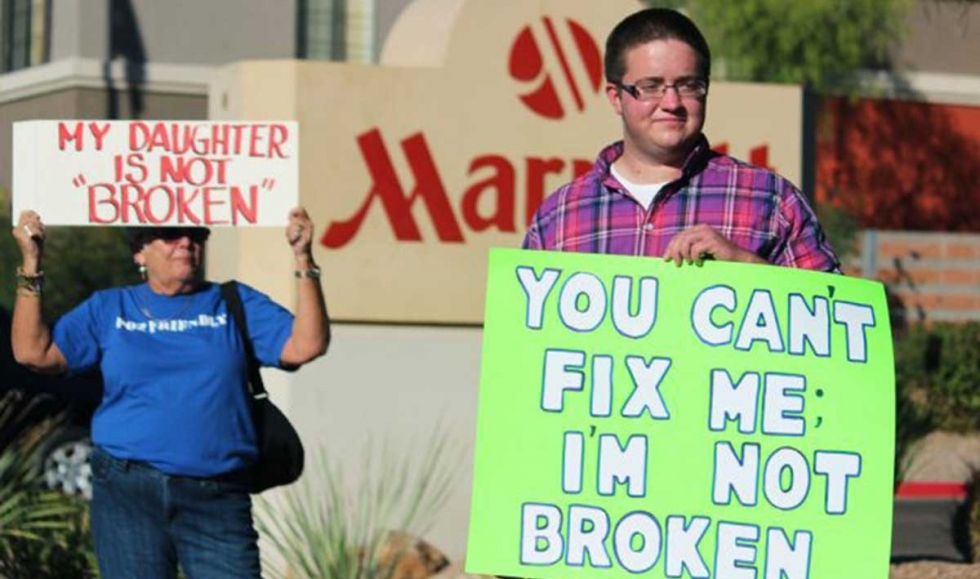 The Victorian Parliament recently passed horrific legislation designed to solve a problem that does not exist and, in doing so, trod all over the rights of families, medical practitioners, those experiencing unwanted same sex attraction and the Church.

It all boils down to whether you think that “homosexual” is a noun or an adjective.

Gore Vidal (I think it was) once claimed that there were no homosexual people, only homosexual acts.  Perhaps he was simply reflecting the newly appointed US Supreme Court Judge Amy Coney Barrett’s use of a very un-pc expression, “sexual preference”, a mortal sin in the twenty-first century secular state.  Now matters of sex are more properly called “sexual orientation”, a stamp apparently gifted at birth by the Creator, and gifted for life.  The now disgraced actor Kevin Spacey once stated, “I now choose to live as a gay man”.  Oops.  Again, not politically correct in these times.

Much rides on the distinction.  If gaydom is a choice, then it is a choice that might be rescinded, by personal choice or by the influence of others.  If gaydom is in the chromosomes, as it were, then evils like “conversion therapy” are not only pointless but also morally repugnant, in the era of homosexual worship.

As David van Gend (normally described in the media as “controversial”, which means I will probably agree with him) has noted, if homosexuality can be, for some, a choice, then do we not have a problem with the liberty of individuals and their inalienable rights?

The libertarian championing of individual choice does not seem to extend to the liberty of gay people to modify their sexual responsiveness in their desired direction.

The question is topical, of course.

That bastion of political wokeness, the Victorian Government, has just passed a law to ban attempts to reverse same sex attraction, regraded by some as being a form of domestic violence.  This past week has seen this controversial legislation passed, with merely a handful of MPs voting against the seemingly inexorable tide.  The Victorian Liberal Party, for whom the phrase “what are they there for?” seems to have been invented, naturally didn’t put up any resistance, save for a couple of brave outliers.

“Therapy” has been defined very broadly, and the penalties for transgression are severe.  One can easily imagine suitably kitted-out, mask-wearing VicPol officers breaking down doors, throwing Christian parents to the floor and pressing down on their necks.  Prior to their being taken away to lonely cells in Barwon Prison.  Solitary confinement would be preferred.

What are you in for, mate?  Well, my teenage son thought he was gay, and I suggested we pray about it.

Of course, Daniel Andrews’ Labor buddy in Queensland has already been down this road.  As van Gend notes:

Buried deep in the dull-sounding Health Legislation Amendment Bill 2019, you will find ‘Chapter 5B, Conversion therapies’, which will send a GP to jail for 18 months if he dissents from transgender ideology; if he refuses to usher a gender-confused boy down the path of experimental, brain-shrinking, castrating ‘transition’.

… Even if Labor gives ground on gender, it will not yield on sending a GP or counsellor to jail for holding the wrong views on homosexuality. It’s a 12-month sentence for helping a client who is unhappy with his homosexual feelings and wants to explore his heterosexual potential.

Much of the weaponry provided to the Victorian and other anti-religious, gay-friendly governments comes from something called the Human Rights Law Centre at (where else?) La Trobe University.  In 2018, the Centre published a report based on a number of alleged horror stories related to conversion therapy, and urged the Victorian Government to create a new law banning it.

Your tax dollar at work.  Providing bullets to fascist governments bent on destroying individual rights in the name of the group rights of ideologically preferred, loud, hectoring interest groups.  No objective, scholarly research in sight.

This is just another in a line of totemic struggles between the forces of progressivism and tradition.  It is added to the ever-growing list of battles in the sex wars.  Victoria has been a leader in this.  Under Daniel Andrews especially, the state south of the Murray has moved the goalposts bit by bit away from traditional Judeo-Christian understandings of sex towards a sexual free-for-all libertinism whereby anything goes.

The homosexual lobby is very good at the “blood on their hands” argument.  Israel Folau caused “suicides”, as the former South Sydney and Manly NRL forward Ian Roberts would have it.  And Margaret Court is up there with Josef Mengele.

The new Victorian law spares no one, and not just the churches and medical practitioners.  Parents cannot engage with their possibly sexually confused teen children, other than to “affirm” their sexuality.  Affirming is very important for the homosexual lobby and their useful idiot fellow-travellers.  You have to like it.  Accept it.  Cheer it on.

All these gung-ho gay liberationists seem to be forgetting one important fact.  Gore Vidal was onto something.  As was Kevin Spacey.  Does not the “B” in the LGBT consortium suggest that these things might be fluid, and matters of choice?  Not forever.  Not immutable.  If homosexuality is, at least for some, a choice, does not that suggest that those who are perhaps unhappy with their sexual choices might reasonably be open to engagement with those who might wish to help them resolve their confusions?

Where, again, are the social libertarians?  Even the famous scholar and lesbian (not yet a hasbian, as Jerry Seinfeld might have said), Camille Paglia, gets it:

If a gay man wants to marry and sire children, why should he be harassed by gay activists accusing him of ‘self-hatred’? He is more mature than they are, for he knows that woman’s power cannot be ignored. If counseling can allow a gay man to respond sexually to women, it should be encouraged and applauded, not strafed by gay artillery fire of reverse moralism.

Paglia believes that sexual orientation is fluid and can change.  In a world of bi-sexual men and women – the B in the acronym, the one letter that is seldom mentioned anywhere – Paglia’s claim seems to me to be merely stating the obvious.  See under K Spacey.

One of the big problems for the tiny gay minority in Australia is that conversion therapy sometimes works!  I am not speaking here of homosexual Christians who do their best to avoid sin and temptation – as we all should – but those who actually modify their sexual “preference”.

Some of the stories at VoicesofChange.net are worth reading here.

Van Gend, again, is the go-to warrior on this issue.  He says that as many as a third of those who enter the process emerge with different behaviour.  I, for one, do not see a problem with that, even if Daniel Andrews does.

‘Conversion therapy’ [the claim to be able to change someone’s sexuality or gender identity] destroys lives. And soon, it will be against the law in Victoria. Because bigoted quackery has no place in this state.

In fact, it isn’t bigoted.  It is, indeed, Daniel Andrews who is bigoted.  Nor is it “quackery”.

(Incidentally, van Gend was attacked in a 2020 pre-selection battle by the gay-friendly city Liberals who now run that once moderately great party.  He is regarded as notorious not only by the radicals at La Trobe University but also by fellow-Liberals, especially those of the Tim Wilson/Trent Zimmerman faction.  We should, therefore, not be surprised by the Victorian Liberals’ usual squeamishness in relation to the recently passed Act.  The only Upper House Liberals to vote against the repugnant legislation were the redoubtable Bernie Finn and Bev McArthur).

The myth of electrodes attached to the heads of coerced homosexuals implied in the very words “conversion” and “therapy”, designed of course to mislead, is just that, a myth.  As one doctor explains:

This doctor terms the process “reparative” therapy.  Another appropriate term would be “collaborative counselling”.  We cannot have that!

Where is the scientific evidence of harm?  It isn’t there, or at least, as van Gend notes, “the science is unsettled”.  This from the American Pschological Association:

Early and recent research studies provide no clear evidence of the prevalence of harmful outcomes among people who have undergone efforts to change their sexual orientation or the frequency of the occurrence of harm because no study to date of adequate scientific rigor has been explicitly designed to do so. Thus, we cannot conclude how likely it is that harm will occur from SOCE. (SOCE stands for sexual orientation change efforts).

Speaking of what the views of social libertarians should be, in order to be consistent, on the question of sexual orientation, what about the whole transgender debate?  Here the progressives are in favour of change!  Change of gender is good – if an individual wishes it.  Change of sexual orientation is bad.  It is difficult to keep up.

The big bulwark for the ideological gays is, as always, traditional Christianity.  The two do not mix.  It is a declared war.  The philosophy of affirmation conflicts at the most fundamental level with a religion that decrees that homosexual acts are sinful.  This essentially private, philosophical stoush has bled into the public square.  Governments are messing with sacred matters.  Again.

The Victorian legislation, itself astonishing in its audacity, has implications for all sorts of religious matters.  All the amendments proposed, that might have preserved some semblance of religious protection, were summarily dispatched.

Now the state has stepped into our private, domestic conversations, about matters sacred and personal.  The images of poor homosexuals being dragged off to funny farms to be subjected to mad professors attaching electrodes to their heads and messing with their brains has been useful, but the real 1984 stuff here is something quite different.

It is the new imposition of state-determined cultural oppression in the name of goose-stepping homosexualists who, we have seen during and since the same sex marriage debate, are not minded to take prisoners.  Two thousand years of Christian tradition can be dismissed in a flash.

Many of us have known people, often Christians, suffering the oppression of unwanted same sex attraction, especially as teenagers finding their way in life.  Life is confusing, nuanced, troubled and problematic.  Denying the right of the innocently same-sex attracted boy or girl to seek help, even within the family, is a moral evil.  But, at least in Victoria, what else would we expect?

Let the state control these matters, and we are admitting defeat in the face of Big Brother.  Pink Big Brother.  An iron fist in a rainbow glove.

The gay “community”, essentially a fiction invented by the postmodern world, may be not for turning.  Individuals struggling with their sexual issues might beg to differ.  Now, in Victoria, if they do, they and their deeply caring families and mentors who see life as eternal, care for the souls of their loved ones and still believe that sin is a real thing, will be thrust into prison.

Is that what we consider a civilised society?