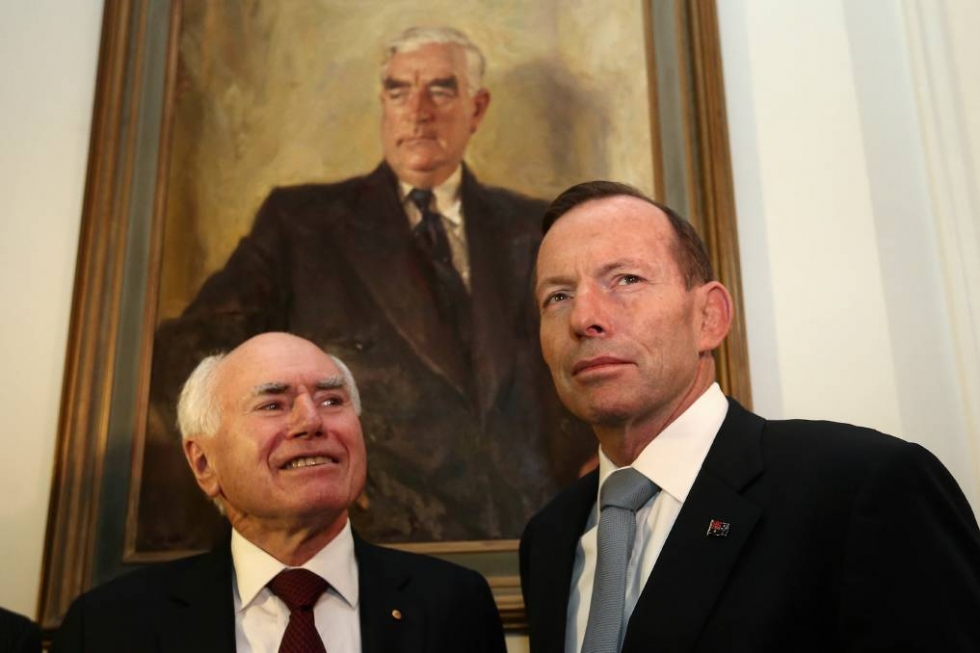 The journalist Niki Savva has been stalking Tony Abbott for what seems like decades.  Suddenly noticing a current absence of political leadership, Savva has broken the habit of a lifetime and actually praised Abbott.  As an Opposition leader.  She still misses plenty.

The journalist Niki Savva has been stalking Tony Abbott for what seems like decades.  Suddenly noticing a current absence of political leadership, Savva has broken the habit of a lifetime and actually praised Abbott.  As an Opposition leaders.  She still misses plenty.

We do, indeed, live in strange times.  Not so long ago, the thought that I would be nodding in agreement with anything that Niki Savva said or wrote would have been beyond imagining.

Then again, thinking two years ago that henceforth I would be forcibly prevented from travelling to Europe to meet my recently born grandson – by a Liberal Government, even one led by Scott Morrison – would also have been inconceivable.  Or that in 2021 I would be stopped from driving across state borders, be forced to wear a mask, be prevented from going to church, or be pilloried as a pariah or a crank for refusing a vaccine that isn’t really a vaccine, is risky to take, and for over 99 per cent of the population is simply not needed.  These things would equally have not been considered possible.

Strange times.  Savva, Malcolm the Second’s in-house journalist, has been castigating Australia’s opposition leaders, and the one in Canberra in particular, for, well, not doing their jobs.  As well she might.  Along with the limp Australian fourth estate, opposition leaders have simply ceased calling out with vigour, voice and intent the manifest failures of those in office.  Savva pointed out any number of deficits of the current lot and the total lack of strategic or tactical nous on display.  Like keeping messages simple, few in number, focused and relentlessly repeated.  And media grabbing.  Her model was Tony Abbott, a Liberal leader that she did more than her bit to help bring down.

Quoting the Liberal eminence grise, polished apparatchik and quintessential Menzian, Tony Eggleton, Savva concurred that Abbott was Australia’s best ever opposition leader.  Many would agree.  Two other candidates could be considered to provide tough competition – Gough Whitlam and Malcolm (the First) Fraser.  They were outstandingly leaderly in opposition, and, with the considerable help of weak or disastrous opponents in The Lodge, created a general sense of inevitability about their coming electoral victories.  Many would also agree that these last two were monumentally bad prime ministers.  Seriously bad, because while neither of them was a great political bungler – there will be argument about this – they were, almost without peer, disasters for their nation.  Whitlam’s sins of commission and Fraser’s sins of omission are the stuff of political legend, despite the left’s continued deification of Edward Gough.  Most Liberals have, mercifully, stopped talking about Fraser.

Savva, as expected, couldn’t resist a dig at Abbott the failed prime minister.  Again, many might agree.  But Abbott, unlike his two main contenders, cannot be called a failure since he hardly had his feet under the desk when he was butchered, with Savva then cheering from the sidelines.  If the same fate had befallen John Howard in, say, 1998 after the near disaster that was the GST election, I wonder how many would now regard him with the awe about his leadership and the nostalgic affection that many Australians clearly do.  People often talk about the best prime minister we never had.  Kim Beazley Jr is sometimes mentioned in this connection.  Abbott surely must, too, be a contender, since a case could be made that he never really was, completely, a prime minister.  (At least Rudd, also cut down prematurely, got a second go at it).

But Savva and her moderate Liberal peers have a vested interest in maintaining the fiction that Abbott’s premiership was a failure.  Defenestrating a potentially great leader way before time isn’t a good look, on reflection.  There might even be a smidgeon of guilt.  Better to keep saying that he was a failure.  Many Liberals seem to think that Abbott was alone in being a “flawed” leader.  For him, in particular, it seems, the bar was set high.  Whatever.

More importantly, Savva only got Abbott as opposition leader half right.  To his enemies, Abbott was, then and with hindsight, “toxic”, “divisive”, “hardline”, and so on.  A Thatcherite-type to Morrison’s Boris Johnson or John Major.  To his still many (quiet Australian) friends, Abbott didn’t just bring savvy and tactical cred to his leadership role.  The Liberal Party scholar, David Kemp, then a young political science academic, penned in 1973 a strategically important paper titled “A Leader and a Philosophy” that helped propel Malcom Fraser into the party leadership and keep him there.  Kemp’s timely piece stressed not only the vigour and strength that were needed in a Liberal leader. These attributes came to be seen as the potential leader Fraser’s trump cards during the short and ineffectual reign of Billy Snedden.  Kemp also underlined the fact that a Liberal leader needed to stand for something.  (And we all thought at the time that Fraser stood for something).  He stood out from Whitlam in so many fundamental ways.  (Again, so we thought at the time).  That was the “philosophy” part, something that the post-Howard Liberals of the early twenty-first century might care to reflect on.

Tony Abbott wasn’t just a canny retail politician.  He brought to the table, a table that is now sadly bare, spine AND morals.  He brought a belief system, one that many of us scarcely recognise as being held by any of his successor Liberal leaders.  Yes, it is a belief system that Savva would find – did find – repugnant.  But a belief system to which at least a healthy minority of Liberal and Labor politicians, as well as a number of the micro parties and their increasing supporters, still passionately adhere.

As well, and Savva also missed this, a feature of Abbott’s political approach and a reason for his success as an opposition leadership was his capacity to link the hot-button issues he hammered on the stump to his core philosophy – pragmatically centrist, socially conservative, economically liberal with limits, patriotic, sensibly wary of untrammelled globalism (with its incontinent levels of immigration) and dismissive of environmentalist fads and lies.  This was not populism, as a number of the “core promises” he undertook in opposition and the values to which he held were, by no means, accepted by the bulk of an increasingly woke population.  They certainly were anathema to vocal elites with megaphones who forever derided Abbott’s views on what were, for them, core issues.

Abbott was known to stand for something, and everyone knew what it was that he stood for.  He had a narrative.  This, of course, made it relatively easy for him to make sense of the world around him and to project his understanding of issues to the people in a coherent way.  Not for Abbott focus group-led policy, swinging in the breeze, pivoting one way then the other on whims (like a certain Liberal in Macquarie Street).  But Abbott didn’t let his strongly held views on, say, life issues and the nature of marriage, derail his determination to be a mainstream Liberal leader first and foremost.

So, yes, Abbott was a truly great opposition leader.  He understood what it means to hold governments to account, both for their mistakes but also for their flawed philosophies.  And yes, Niki Savva, we certainly could do with a few right now, living as we are in a world of disastrous illiberalism, policy deceit, political panic and coming penury.  Where everyone in politics seems to agree with everyone else.  While we all go down the gurgler.